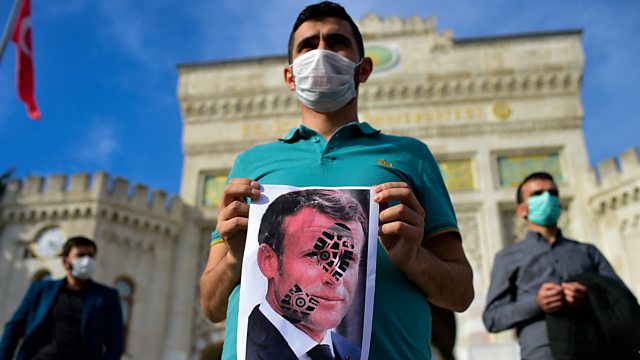 The latest business and finance news from around the world, on the BBC.

Turkish President Recep Tayyip Erdogan has called on Turks to boycott French goods after French President Emmanuel Macron's defended the right to show cartoons of the Prophet Muhammad. Islamic teachings strictly forbid the making of his image. Mr Macron was speaking after the beheading of French teacher Samuel Paty, who had shown cartoons of the Prophet in his class. We get the latest from BBC Middle East business correspondent Sameer Hashmi. Japan's new Prime Minister Yoshihide Suga has pledged to make the country carbon neutral by 2050. We ask Takeshi Kuramochi, climate policy researcher from the New Climate Institute in Cologne, Germany, how this can be achieved. And we have a special report on medical oxyen, which has helped save the lives of hundreds of thousands during the coronavirus pandemic. In some countries though, oxygen has been in desperately short supply. Mike Johnson has been discovering why, and what’s being done to address the problem.

(Picture: a man in Istanbul holds a picture of Macron with a shoe print on it during a demonstration against French President's comments over Prophet Muhammad cartoons. Credit: Getty Images.)