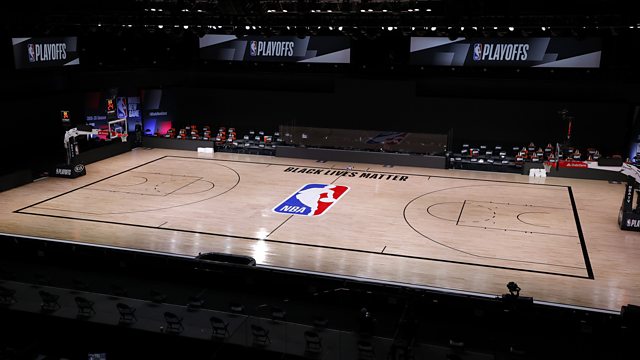 This week on Sportshour, we take a look at the boycott of American sport in the wake of the shooting of Jacob Blake in the US.

This week on Sportshour with Caroline Barker, we take an in-depth look at the situation in American sport after players in the NBA, WNBA, MLS and MLB refused to play this week following the shooting of Jacob Blake.

Two time NBA Champion Shannon Brown joins us to discuss the events of the last week and what needs to change. His brother – Sterling – plays for the Milwaukee Bucks. They were the first NBA team to say they wouldn’t play and he tells us about speaking to his brother in the bubble. We’re also joined by former Bucks player DeAndre Liggins and former WNBA player Tamara Moore. She gives us her reaction to the shirts worn by the Washington Mystics players that had bullet holes painted on the back . Professor Louis Moore tells us athlete boycotts do work and that he’s now expecting players in the NFL to make their voices heard if the season goes ahead.

We look ahead to the start of the Tour de France with Team Cofidis rider Nathan Haas and Jean Luc-Perez, who won the Race Across France. Haas tells us a stage win is like a “unicorn” for a French team and that uncertainty over rider contracts and 2021 has led to more risk taking among the peloton.

We hear from Sophia Popov after her shock win at Royal Troon to claim the AIG Women’s Open by two shots. The German golfer had not previously won on the LPGA or Ladies European Tour before and she tells us about her ambitions for the future.

This week’s Sporting Witness tells the story of British Olympic medal-winner – Tasha Danvers. She faced a common challenge for women athletes – how to juggle an athletics career with starting a family.

And – we preview the Women’s Champions League Final between Wolfsburg and Lyon, with Rebecca Smith from Copa 90.

Photo credit: An empty court and bench is shown with no signage following the scheduled start time in Game Five of the Eastern Conference First Round between the Milwaukee Bucks and the Orlando Magic during the 2020 NBA Playoffs at AdventHealth Arena at ESPN Wide World Of Sports Complex on August 26, 2020 in Florida. The Milwaukee Bucks boycotted game 5 to protest the shooting of Jacob Blake in Wisconsin (Getty Images).

"I cried watching the film” – McFadden on Rising Phoenix