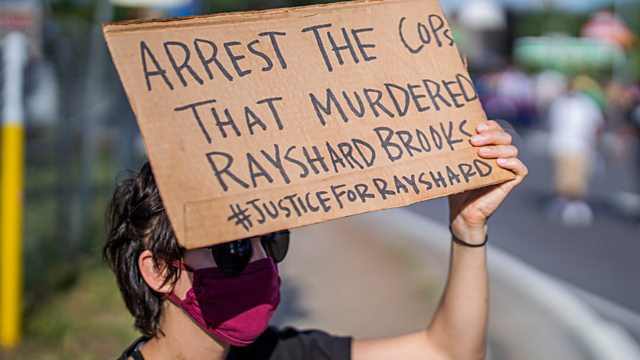 An African-American man, Rayshard Brooks was shot dead by police near a drive-through restaurant

Atlanta's police chief, Erika Shields, has resigned after the fatal shooting of an African-American man who had fallen asleep in his car at a drive-through restaurant. Rayshard Brooks was shot by a police officer during a struggle on Friday evening, authorities say. Protesters in Atlanta took to the streets this weekend. The Wendy's restaurant outside which Mr Brooks died was also set on fire.

Also in the programme: The Italian families calling for an investigation into the country's coronavirus response; and who is Kim Yo Jong, the sister of North Korea's leader playing an increasingly important role in the secretive country?

(Image: Protesters hold placards near the scene of the police shooting which left a black man dead at a Wendy's restaurant in Atlanta. Credit: EPA/Erik S. Lesser)