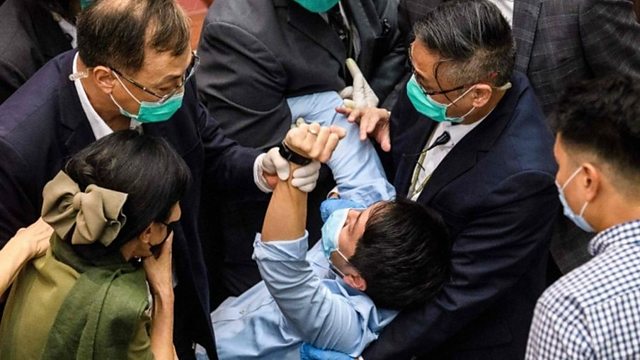 China's ruling Communist Party has set in motion a controversial national security law for Hong Kong, a move seen as a major blow to the city's freedoms. The law to ban "treason, secession, sedition and subversion" could bypass Hong Kong's lawmakers. Hong Kong's leader - Carrie Lam - says she supports the new national security law. We hear from one of her close allies and get a response to that from a pro-democracy lawmaker.

Also in the programme: A Pakistan International Airlines plane has crashed in Karachi on a flight from Lahore; and the real life Lord of The Flies -- the schoolboys shipwrecked in the 1960s, a story of survival and cooperation.

(Photo: A number of pro-democracy lawmakers were dragged out of Hong Kong's legislative chamber during a row about a Chinese national anthem bill. Credit: Getty Images)