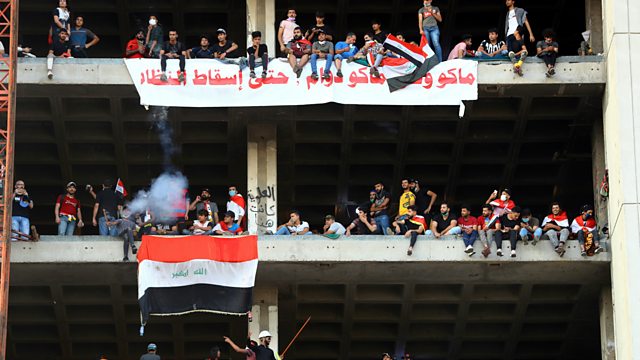 Anti-government protests continue on the streets of Iraq; Aramco gets flotation go-ahead

Protesters in Iraq remain in the streets determined to force the government out.

Also in the programme: Saudi Crown Prince, Mohammed bin Salman, has given the go-ahead for the initial share offering of the state oil company Aramco, set to be one of the biggest flotations in history.

And the Serbian Marina Abramovic calls herself “the grandmother of performance art”, and Belgrade's Museum of Contemporary Art is hosting a massive, career-spanning retrospective. Our correspondent has been along to the show.

Joining Julian Worricker to discuss these and other issues are Nervana Mahmoud, medical doctor and commentator on Middle Eastern issues; and Daniel Glaser, neuroscientist and writer.

The prospects for peace in Syria