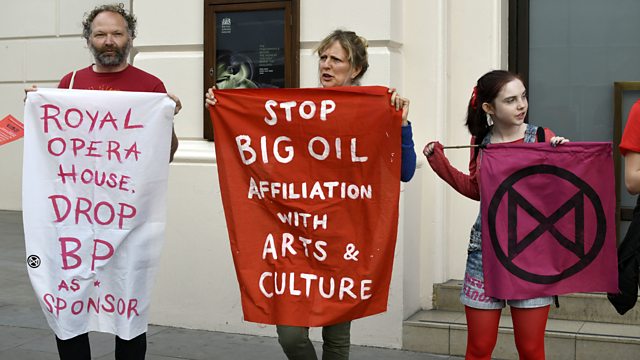 We look in depth at the funding relationship between corporate sponsors and the arts.

We look in depth at the funding relationship between corporate sponsors and the arts. Last week in the UK in response to protests, the National Theatre ended its relationship with Shell, and the Royal Shakespeare Company pulled out of a funding deal with BP. The BBC's arts editor Will Gompertz tells us how significant corporate sponsorship is to arts organisations. We hear from a campaigner who has been targeting corporate sponsorship. Ros Sheldon of reputation management company Igniyte discusses how damaging it is for a brand when sponsorship is ended. And Bryan de Lottinville, founder and chief executive of Benevity, explains how companies in the United States are changing the way they choose to donate. Also in the programme, Turkey has begun an offensive in northern Syria. US president Donald Trump has threatened sanctions against Turkey depending on how the conflict plays out. Can Selcuki is general manager of Istanbul Economics Research, and considers the impact any sanctions might have on Turkey's economy. Plus a week after legislation in India to ban single-use plastics was shelved, we look at the political fall out.

Does blockchain live up to the hype?