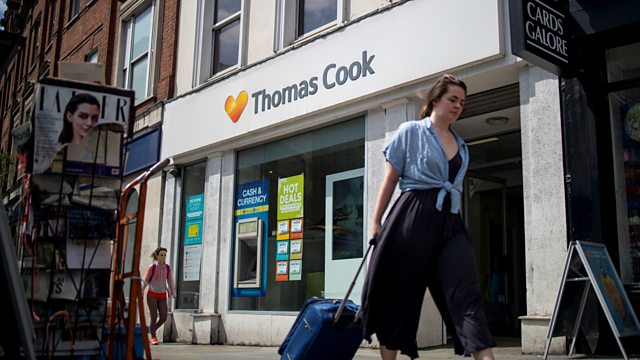 Travel company Thomas Cook is in rescue deal talks with banks and its largest shareholder.

Travel company Thomas Cook is in rescue deal talks with banks and its largest shareholder. Aviation expert Jens Flottau tells us where things have gone wrong for the company. Also in the programme, today marks five months since the Republic of Macedonia in Southeast Europe was officially renamed the Republic of North Macedonia, following a dispute with neighbouring Greece over the name. We get reaction to the move from people in the town of Ohrid in North Macedonia. Alexandra Voudri, diplomatic affairs editor of Athens 98.4FM explains how the issue is still problematic for many Greeks. And Richard Grieveson, deputy director of the Vienna Institute for International Economic Studies, discusses the politics of the name change. Plus, our reporter in Togo meets a trader in the country's capital, Lome, who is taking clothes from landfill sites, and upcycling them for the world's fashion capital.