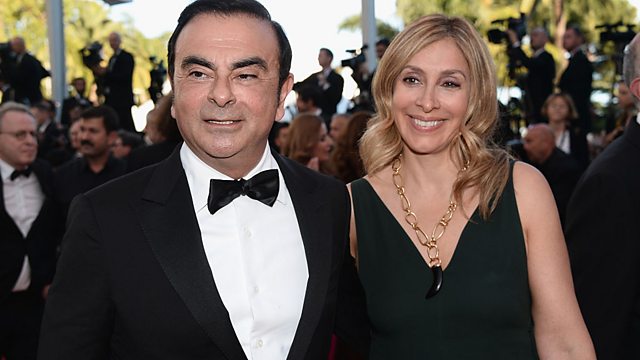 Carole Ghosn, the wife of Carlos Ghosn has told the BBC the arrest of the former Nissan and Renault chairman was a conspiracy. Nissan disputes the claim.

Carole Ghosn, the wife of Carlos Ghosn has told the BBC the arrest of the former Nissan and Renault chairman was a conspiracy. Nissan disputes the claim, arguing there is substantial evidence against him. Carole Ghosn, speaking to the BBC's Michelle Fleury in New York, explained that she is appealing to Donald Trump to apply pressure over her husband's legal battle.

Electricity is being restored gradually to Argentina and Uruguay after a blackout left 48,000,000 people without power. We hear from Natalio Cosoy in Buenos Aires.

UK media companies are increasingly going to court to block people illegally uploading their content online according to figures from law firm RPC. A partner at the firm, Ben Mark tells us more and we also speak to technology analyst Bethan Vincent.

A proposal to build a hydroelectric power station on the River Nile has alarmed the Ugandan tourism industry because the project will be constructed near the picturesque Murchison Falls. We hear from Nebert Rugadya, business editor at Radio One in Kampala.

The UK and China are allowing companies listed on the London Stock Exchange and firms listed at its counterpart in Shanghai to trade shares on both financial markets. Our regular economic commentator Michael Hughes tells us how this will benefit British and Chinese companies.