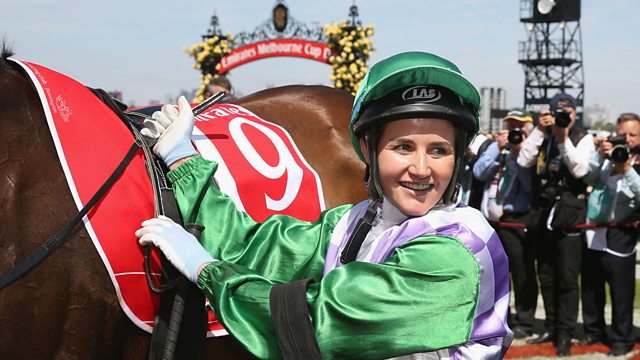 Michelle Payne and the race that stopped Australia

The film Ride Like A Girl tells the story of Michelle Payne's Melbourne Cup success.

Michelle Payne became the first woman to take one of the world's greatest sporting prizes, shocking the world by winning the Melbourne Cup in 2015. Now the story has made it to the big screen. It highlights how Michelle defied the odds in a sport dominated by men and how she achieved a lifelong ambition. The film was released in Australia this week and Michelle was our special guest, joining Caroline to react to her momentous story made into a film.

The standout moment of netball coach Tracey Neville's career was guiding England to Commonweath Games gold last year, but this week she revealed she suffered a miscarriage the day after. She has recently announced that she and her partner are expecting their first child. She's been telling the BBC's Sally Nugent why now is the time to put her family first.

Tony Riddell is running from Land's End to John O'Groats, enduring 30 miles a day over a 30 day period. But this is not your average running story: Tony is doing this challenge barefoot. He tells us why.

We also hear from a remarkable sporting family. Brothers Jakob, Henrik and Filip Ingebritsen will compete for the 5000m gold at the World Athletics Championships in Doha. There are seven siblings in total, and their life revolves around athletics. Even on their wedding days, Henrik and Filip fitted in a training session. Their father Gjert Arne won Norwegian Sports Coach of the year last year, and has also written a a book called How to Raise World Champions.

With a year until the Paralympics in Japan, we'll find out how accessible it is to travel around Tokyo, and how rugby has a rich history in Georgia.

‘A testament to our Union and our country’

Alberto Salazar: The inside story