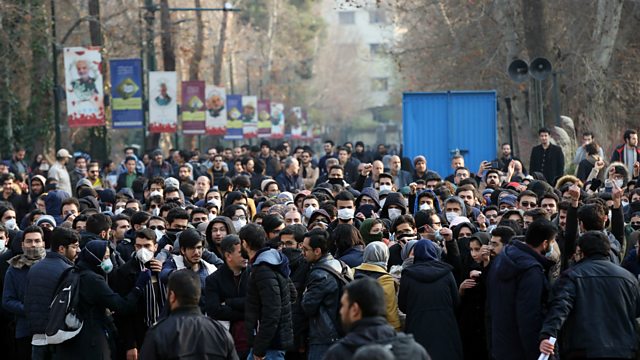 For a fourth day protests have taken place in Iran objecting to the government's attempted cover-up of shooting down an Ukrainian airliner last week, while the UK, France and Germany have triggered a dispute mechanism for Iran violating elements of the nuclear deal.

Also in the programme: Gun battles on the streets of the Sudanese capital Khartoum between the army and members of an elite unit that was loyal to the former President Omar al-Bashir; and did the former Pope Benedict XVI agree to co-author a book which criticises the current Pope Francis's plan to relax the Catholic Church's rule on priestly celibacy?

(Photo: Iranian students protest to show their sympathy to victims of Ukraine International Airlines Boeing 737-800 at Tehran University in Tehran, Iran, on 14 January 2020. Media reported that some protestors were arrested following protests in Iran in solidarity with the victims. Credit: EPA/Abedin Taherkenareh)