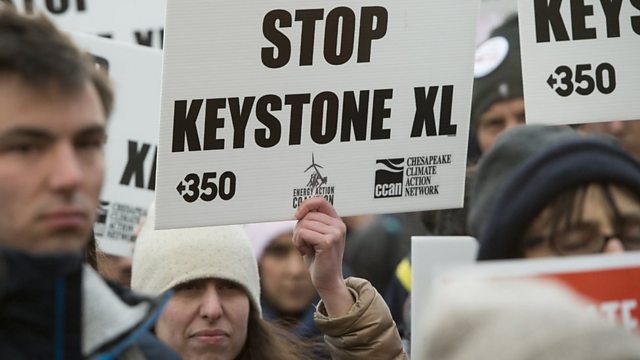 A judge has blocked construction of a controversial oil pipeline from Canada to the US.

A judge has blocked construction of a controversial oil pipeline from Canada to the US. Timothy Cama is energy and environment reporter at The Hill in Washington, and tells us how big a blow the move is to the Keystone XL project. Also in the programme, ahead of a change of government in Brazil in January, we discuss the country's economic prospects with outgoing Brazilian finance minister Eduardo Guardia. There's a summit in Nigeria between the country's central bank and bosses of four banks at the centre of a dispute between the government and South African telecoms giant MTN. Asief Mohamed is chief investment officer at Aeon Investment Management, and explains the significance of today's meeting. We have a report on the prospects for low-denomination coins like the US penny, which now costs more than twice its face value to produce. Plus we look back at the rest of the week's big business stories with Philip Georgiadis of the Wall Street Journal in London, and Patricia O'Connell, former editor of Bloomberg BusinessWeek in New York.

(Picture: A protestor holds up a sign against the Keystone XL pipeline. Picture credit: Getty Images.)