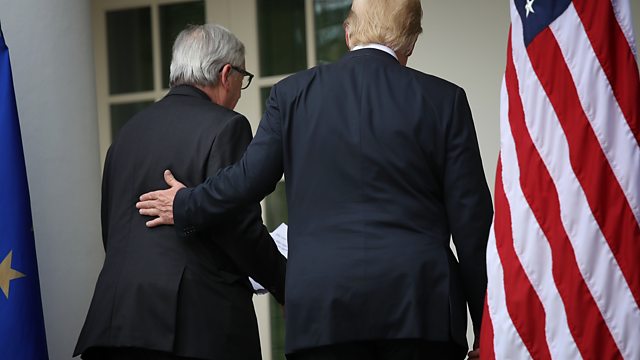 Nafta in Spotlight after US and EU Agree Trade Truce

Talk of a trade war between America and the European Union is over - for now.

Talk of a trade war between America and the European Union is over - for now. The two sides have pledged to work together to lower tariffs. Now, the future of another trading bloc is in focus. The North American Free Trade Agreement (Nafta) will be discussed by Mexico's economy minister and the US trade representative Robert Lighthizer. Marianne Schneider-Petsinger at Chatham House explains why hostilities could resume. Also, shares in social media giant Facebook have plunged following disappointing financial results. Dr Ciarán McMahon says users haven't given up "liking" Facebook just yet. Then, ten years after the leaders of Brazil, Russia, India, China and South Africa attended the first summit to champion the world’s leading emerging economies, we ask if the so-called BRICS are still relevant. And, the BBC's Jonathan Josephs explores what's behind our increasing thirst for ethically sourced and sustainable coffee.

Nafta in Spotlight after US and EU Agree Trade Truce