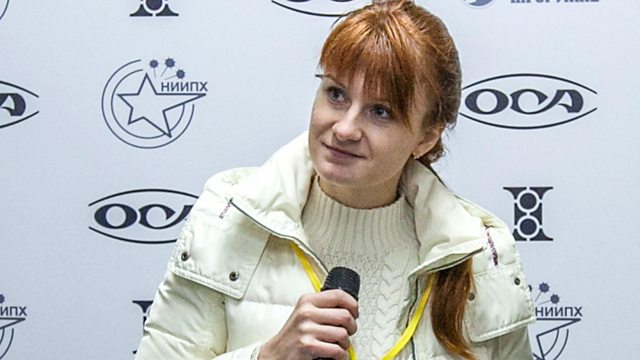 Russian Activist Pleads Guilty in US

A Russian woman accused in the US of acting as an agent for the Kremlin to infiltrate political groups has pleaded guilty in a deal with prosecutors.
Gun rights activist Maria Butina allegedly tried to infiltrate the National Rifle Association (NRA) in an effort to influence US policies in favour of Moscow.

The National Rifle Association is one of the most powerful lobby groups in the US - closely aligned to senior Republican politicians including President Trump. She said she had acted under direction of a senior Russian official. Polly Mosendz is firearms industry reporter of Bloomberg in New York gives us the background.

As the world's biggest producer of oil, Saudi Arabia has been under a lot of pressure, not least from US President Donald Trump, who does not want a cut in supplies or a rise in prices. But now, Bloomberg reports that there will be a sharp cut in exports from Saudi Arabia in January from around eight million barrels a day to seven million. Anne-Louise Hittle of Wood Mackenzie analysts in Boston gave me her view of this development.

The holy town of Pushkar in northern India has been home to the biggest camel fair in India for 150 years.
Trading camels is a valuable source of income for members of the pastoral communities in the rural state of Rajasthan. But making a living from camels is getting harder. Two years ago the central government introduced a new law that declared camels belonged to the state, to protect them from being slaughtered for meat. The government's also restricted them from being sold outside Rajasthan. Devina Gupta reports from Pushkar.

Presenter Roger Hearing is joined by Dante Disparte, founder and boss of Risk Cooperative who is in Washington, and Jodi Schneider, Senior International Editor, Bloomberg in Hong Kong.

(Photo: Mariia Butina, leader of a pro-gun organization, speaks on October 8, 2013 during a press conference in Moscow. Credit: Getty Images.)