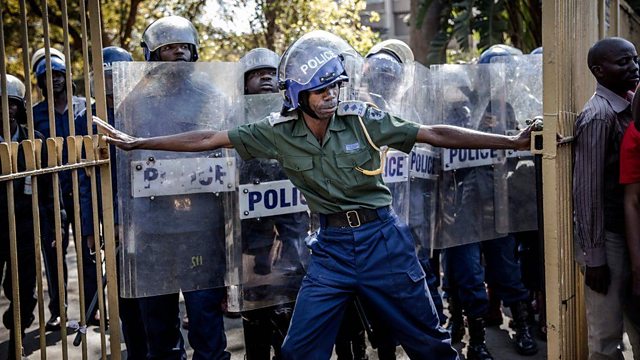 There have been international calls for calm after three people were killed in protests.

There have been international calls for calm after three people were killed in protests. The protests came after the Electoral Commission said the governing ZANU-PF had attained a two-thirds majority in parliament. Our correspondent in Harare, Shingai Nyoka gives us the latest. Turkey has condemned the United States' decision to impose sanctions on its justice and interior ministers, because of Ankara's continued detention of an American pastor on terrorism charges. We ask Amanda Sloat of the Brookings Institution in Washington if this was more than just a spat between allies. We have a report from Gaborone in Botswana on the high level of unemployment for graduates there. Facebook and Instagram are adding screen time-management features to their platforms. But do tools like this work? A question for Tom Crick, a professor of Digital Education and Policy at Swansea University in Wales. We consider the challenge of replacing the toothpaste tube. Plus we speak to our reporter in Sydney, Phil Mercer, for the latest business news in the Asia Pacific.

We're joined throughout the programme by Mark Blyth, professor of international political economy at Brown University in Rhode Island and Sushma Ramachandran, the writer and columnist in Delhi.