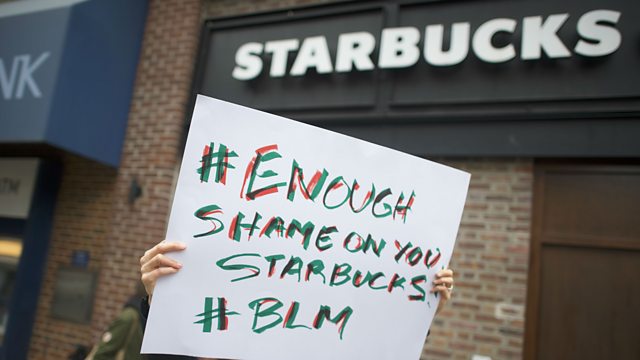 The coffee giant is taking the action two months after a barista in a Philadelphia branch accused two black men of trespassing and called the police. We hear from Heather McGhee of Demos who is involved with educating baristas in racial equality. Also in the programme, six days of fuel strikes in Brazil have led to anger, disruption and finally concessions from the government. The BBC's South America Business Correspondent Daniel Gallas explains the background. On Memorial Day in America, we ask why are so many military veterans running for Congress this year? Plus our regular commentator Pilita Clark of the Financial Times explains why she thinks there is freedom and opportunity in being someone else's deputy. Fergus Nicoll is joined throughout the show by Dante Disparte, CEO of Risk Cooperative in Washington DC, and journalist Sushma Ramachandran in Delhi.

(Picture: Protesters demonstrate outside a Starbucks in Philadelphia after two black men were arrested in April 2018. Credit: Getty Images)