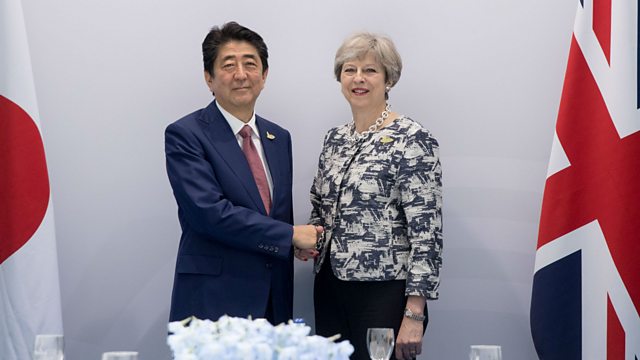 Theresa May is due to arrive in Japan shortly for talks with her counterpart Shinzo Abe. Both sides are weighing up what a post-Brexit trade deal might look like.

The British Prime Minister, Theresa May, is due to arrive in Japan shortly for talks with her counterpart Shinzo Abe. Both sides are weighing up what a future trade deal might look like after the UK leaves the European Union. So what kind of welcome will Mrs May receive in Japan? As Tropical Storm Harvey continues to batter Texas, officials ordered a complete evacuation in Brazoria County after a levee at Columbia Lakes was breached. We have an update from Houston. Moving to Asia, large parts of Mumbai, India's commercial hub, are under water after torrential monsoon rains. Elsewhere, why are so many Bangladeshis leaving their country? They're now one of the largest migrant groups making the dangerous crossing over the Mediterranean from Libya to Europe. The BBC's Sanjoy Majumder reports from Dhaka. And what's the trick to getting young people to ride motorcycles? Andy Uhler's been investigating. Fergus Nicoll is joined throughout the hour by Grace Sai, co-founder and CEO of The Hub Singapore and Andy Uhler from public radio programme Marketplace in Los Angeles.