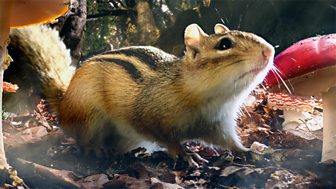 In this story, we meet a young chipmunk in the temperate, deciduous woods of North America. At just a few months old he is already facing adulthood and a very difficult mission. Despite his youth and inexperience he must find his own territory, defend it, and collect enough stores of nuts before the onset of winter. 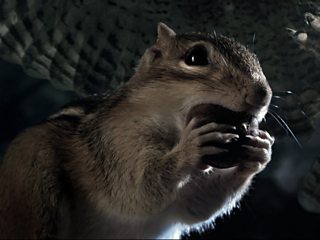 chipmunks can drop their body temperature from 33°C to just 5°C, and enter into a torpid state
Hidden Kingdoms

Chipmunks are unable to accumulate enough body fat to survive through the winter; therefore he must stockpile seeds from oak, beech and maples. The food he gathers is stored in an underground burrow and is vital to his survival. It must be large enough to fuel him through the cold weather and last over six months or in extreme weather conditions nine months of the year.

Foraging from dawn to dusk, he races to get enough acorns into his burrow. To transport these seeds back to a burrow the extensible cheek pouches are used rather like a shopping bag, into which as many as seven acorns are crammed in one go - pushing six in the cheek pouches and one between the incisors!

But competition for food is fierce and almost 50% of hard-earned hoards are stolen by other animals including other chipmunks. Fights between chipmunks are no laughing matter especially when they are young and inexperienced, and on occasion can be fatal when faced by older, more aggressive individuals.

As the cold weather creeps in, he can drop his body temperature from 33°C to just 5°C, and enter into a torpid (sleeping) state. During this time he will stir from his slumber throughout winter to feed. To do this he must raise his body temperature back up to 33°C, which can take as little as 1 hour. After feeding the body temperature then drops back down to 5°C.

Although chipmunks can have litters of up yo 10 babies, sadly, they have an extremely low survival rate - ten chipmunk kits can be reduced down to two in a matter of weeks. The chance of them surviving to the ripe old age of 3-years is only 1 in 300.

Life in the forests is tough and the youngster must contend not only with seasonal changes and competition but also the risk of predation. Hunted by a number of different animals, chipmunks produce alarm calls when they see a predator, and much like meerkats and ground squirrels, produce different calls for terrestrial or airborne predators.

Faced with a cold and hungry demise, the young chipmunk in this story must dodge giant predators that inhabit the shadowy depths of the forest in his quest to retrieve his stolen nuts. 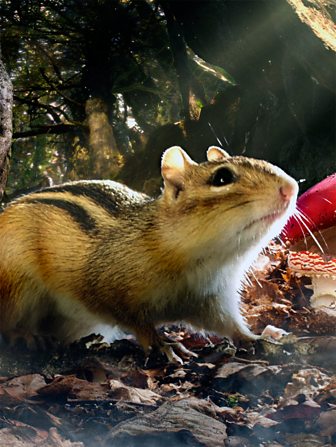