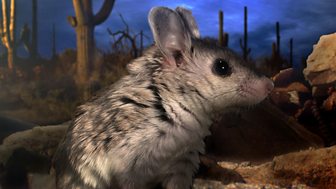 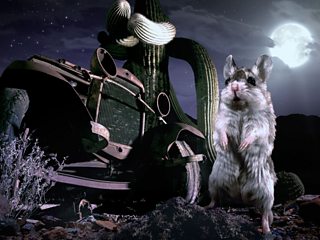 they stand on their hind legs, throw back their head and howl at the night’s sky like a miniature wolf
Hidden Kingdoms

But what a grasshopper mouse lacks in stature it makes up for in attitude. Although he may look cute, this toughened mouse is made to survive in one of the harshest settings on earth.

Displaying bravery against the odds, as night falls he emerges to track down and disarm deadly scorpions. As ancient adversaries, interactions between mice and scorpions have occurred over millions of years, giving the mouse an evolutionary advantage - they have developed immunity to the venom inflicted from a bark scorpion’s sting. They have also developed the ability to convert the scorpion's neurotoxins into a painkiller.

Apart from scorpions this carnivorous rodent is a ferocious predator that also eats grasshoppers, centipedes, but it may even eat lizards and other mice. When approaching prey, the grasshopper mouse will close its eyes and use its paws and whiskers to detect their target.

Mice reared by both their parents are more aggressive and more efficient in attacking and killing prey than single-parent families.

These mice have an unusual way of staking claim to their territory and to warn others of their presence – they stand on their hind legs, throw back their head and howl at the night’s sky like a miniature wolf. The mouse’s ‘howl’ is pitched between 9-14kHz and when played back at a slower speed it sounds like a wolf howling.

At night the grasshopper mouse is king but the rising sun brings new dangers. Lost and alone our young mouse must find a way to stay alive during the heat of the day and face the unfamiliar creatures that inhabit these baking sands. By day the Sonoran Desert is a world of relentless heat often reaching temperatures of 48°C. No place for a nocturnal mouse. 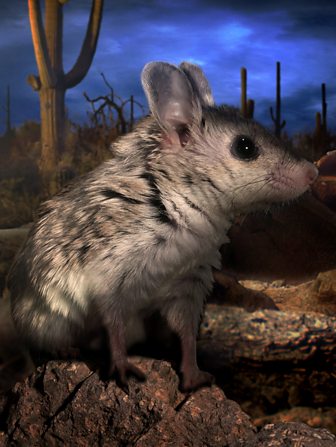