The Battle of Zaruthstra, 4047 AD, and in the pit of war, amidst the gunfire and explosions, a young boy lies injured. A woman tends him but the lad desperately needs medical help. Time is running out and it looks like the situation is lost when a Sontaran appears. But then something remarkable happens. He removes his helmet and calmly asks, ‘Did somebody call for a nurse?’ We’ve just met Strax… 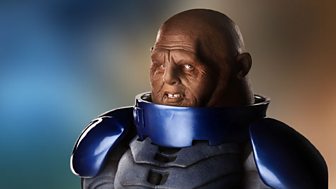 Considering he’s a member of a clone race, Commander Strax is a remarkable individual. We’ve seen the Doctor encounter many Sontarans and whilst every other member of this belligerent species has been guided by a single-minded passion for war, Strax is a nurse. And a good one. We’ve witnessed him save the life of a child in a warzone, give medical advice to a weary soldier and Strax even had himself gene-spliced so he could be fit for all nursing duties. When baby Melody appeared to need a feed he proudly declared, ‘I can produce magnificent quantities of lactic fluid!’

His lack of tact can be staggering. When it looked like the Doctor had vanished and that Clara would be joining the Paternoster Gang he cheerfully gave her a medical examination, marvelling at some of his findings. ‘Watch out for fluid retention later,’ he warned. ‘It’s going to be spectacular!’ But in his own strange way, he did show kindness to the Doctor’s distraught companion, offering her water (albeit in a huge bucket!) and delivering a copy of The Times to her, although Clara would have preferred the newspaper to have been dropped on her mat as opposed to hurled at her head!

He’s now part of the Paternoster Gang, loyally following the orders of Madame Vastra and tackling a wide range of duties, from driving a horse-drawn carriage to taking part in the attack on Mancini’s slaughterhouse restaurant. Such devotion from a Sontaran is atypical, but Strax explained to Captain Harcourt why he was helping those he’d normally destroy with a smile. ‘I serve a penance to restore the honour of my clone batch,’ he revealed. ‘It is the greatest punishment a Sontaran can endure… to help the weak and the sick.’ It’s strongly implied that the Doctor invented this ‘punishment’ and was responsible for Strax’s switch from military commander to medic.

Strax helped the Doctor defeat the Great Intelligence in 1892 and during this adventure we saw how much he relishes working alongside him. Although exasperated by the Time Lord’s ‘retirement’ he was delighted when the game was once more afoot and even felt comfortable teasing his friend about his brief impersonation of Sherlock Holmes!

Strax also encountered the Doctor in Yorkshire, 1893, when fighting the evil Mrs Gillyflower and the monstrous Mr Sweet. He was once again assisting Madame Vastra and was able to save Jenny and the Doctor from the so-called ‘attack of the supermodels’, racing into battle with laser blasting and a familiar roar of ‘Sontar-ha!’

Later, Strax was with the Doctor and the rest of the gang on Trenzalore. A temporal intervention made him briefly revert to his old self and for one chilling moment it looked like he would lethally attack Vastra, sneering, ‘You are an affront to Sontaran purity! Prepare to perish!’

Fortunately, the anomaly was dealt with and in a more heroic moment for the Sontaran on Trenzalore, he restarted Jenny’s heart after it appeared she was dead. ‘The heart is a relatively simple thing,’ he noted after the operation, oblivious to Vastra’s response – ‘I have not found it to be so…’ 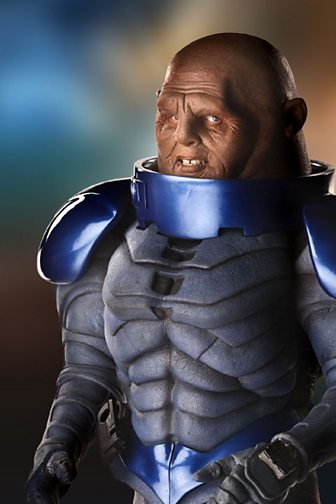 Characters from The Snowmen