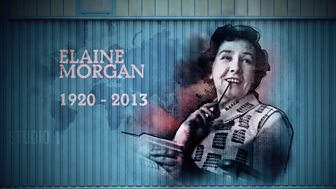 Elaine Morgan was a woman of many talents who changed the world from her desk in Mountain Ash.

I thought they were giving an unduly masculine slant on evolution. They were taking it for granted that evolution consists of making things better for the male mighty hunter…and I thought what about her? And what about the children? I wanted to write a book from their angle. What about the evolution of women?

Excelling in both the arts and science, she became a top TV writer, a feminist icon and a ground-breaking evolutionary theorist.

Born into a poor mining family, she won a scholarship to Oxford University. When she arrived, they heard her valleys accent and assumed she was applying for a job as a cleaner. But Elaine became a star student, chairing political societies and honing her literary skills.

After graduation she taught for three years with the Workers’ Educational Association. Married with three sons by the 1950s, she began writing plays to help make ends meet. One of the first women to make an impact in the male-dominated world of the small screen at this time, her first television scripts were accepted before she even owned a TV set.

In a career spanning 30 years, she won a host of awards and scripted some of the best-loved dramas in television history – including How Green Was My Valley and The Life and Times of Lloyd George.

Sian Phillips, who starred in How Green was my Valley explained Elaine’s screen-writing gift: “There was a time when the writer was king and she was one of the stars. If you saw that name on your script then you really wanted to do it.”

She added: “She was a wonderful plotter. She was a very good storyteller for a start so nobody ever had to do any tweaking. Not a word.” 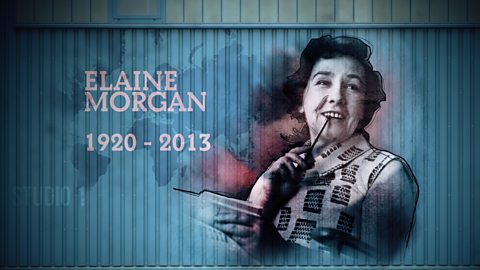 Elaine’s script for a Horizon documentary about Joey Deacon, the disabled fundraiser, won her the Prix Italia in 1975 while her serialisation of Vera Brittain’s wartime memoir, Testament of Youth, won her the Royal Television Society’s writer of the year award in 1979.

In the 1970s Elaine also switched her focus to science, taking on the might of the male-dominated establishment with a new theory of human evolution.

In her book The Descent of Woman, she argued human evolution wasn’t just about the mighty male hunter – females were an equally vital part of the story.

The Descent of Woman was an instant global best-seller. Feted in America as a feminist heroine, Elaine’s book became a key text in the Women’s Liberation movement. In the States she became something of a celebrity as she was invited to promote the book on television in a coast to coast tour.

She went on to publish several more books on evolution – including The Aquatic Ape (1982), which again captured global attention; The Scars of Evolution (1990); The Descent of the Child (1994); The Aquatic Ape Hypothesis (1997) and The Naked Darwinist (2008).

Championed by Sir David Attenborough, she was still being invited to discuss her ideas across the world well into old age. More than a million people viewed the Ted Talk Elaine gave at the age of 89 when it was put on the internet. Closer to home, she wrote her award-winning Western Mail column into her 90s.

She was appointed OBE in 2009 and the same year was elected a Fellow of the Royal Society of Literature.

A Valleys girl to the end, she made a global impact but never left her Welsh roots behind. 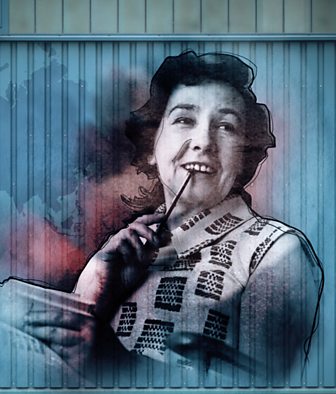