With her big hair and painted face, Angie appeared the life and soul of any party. Actually, she was a real mess, especially her marriage to Den. 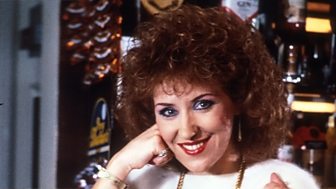 There was never a dull moment in the life of Angie Watts. She burned through Walford like a deranged comet, trailing broken marriages and broken bottles in her midst. She thrived on drama, and was never happier than when plotting some insane revenge on cheating hubby Den. Lofty, Wicksy and even Arthur felt the full force of Angie's crazed charms. Tony Carpenter really fell for her, but she was only using him to get back at Den.

She was the life and soul of the party, always putting on a front for the punters with a bit of a flirt, some cheeky banter and her huge 80s bubble perm. But despite her bravado, all Ange ever wanted was a happy marriage to Den. Fat chance.

Angie and Den were the Square's answer to Elizabeth Taylor and Richard Burton. Equal parts passionate and poisonous, their relationship created serious sparks in the Square. His infidelities, her drinking and her tit-for-tat affairs set the relationship on its inevitible downward spiral. In an attempt to split up Den and his posh mistress Jan, Angie told Den that she had six months to live. Showing an uncharacteristic stripe of honour, Den (temporarily) finished with Jan and pledged to live out Ange's dying months with her.

Unfortunately for Angie, she drunkenly spilled the beans to a barman on the Orient Express, with Den in earshot. And so… in a legendary Albert Square moment, Den triumphantly served Ange with her divorce papers on December 25th with a "Happy Christmas, Ange!"

Den and Ange were temporarily reunited as business partners, but when Den discovered that she was having it off with someone else, he made arrangements to secure his finances and ensure that when she left him, she wouldn't get a penny this time. Angie left the Square in 1988 to be with her lover, Sonny, in Spain. She later moved to Miami and remarried. In the end, the drinking was her downfall, not Den – she died of cirrhosis of the liver in 2002. 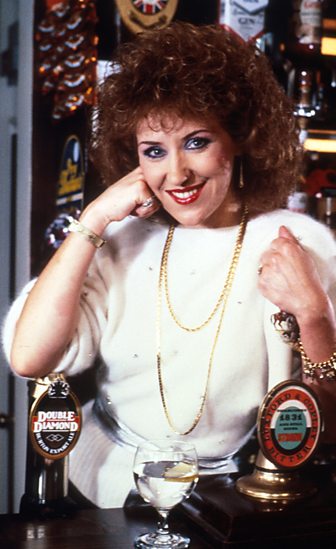