Delia Derbyshire took Ron Grainer’s score for the theme tune of Doctor Who and transformed his written notes into reality, creating a howling masterpiece; insistent and impossible to ignore or forget. 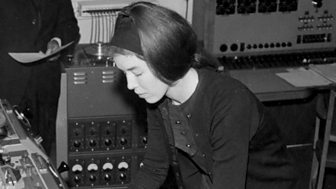 Derbyshire was born in Coventry in 1937. She graduated in 1959 with an MA in Mathematics and Music, her eclectic tastes already evidenced by the fact she specialised in medieval and modern music history. In later years she recalled a careers office advised a job in ‘deaf aids or depth sounding’ but instead she found employment for the UN in Geneva before teaching at primary school level back in the UK.

Almost exactly three years before Doctor Who premiered she joined the BBC as a Trainee Assistant Studio Manager. 1962 she transferred to the BBC Radiophonic Workshop in Maida Vale and the following year she completed her most famous work, the realisation of the Doctor Who theme tune. It sounded completely different to anything that had gone before and proved a perfect way to usher in this strange new show with its enigmatic hero and monstrous, terrifying villains.

An oft-repeated anecdote runs that Derbyshire played the finished piece of music to Ron Grainer who was so astonished by the sound that he is said to have asked, ‘Did I really write this?’ Derbyshire nodded. ‘Most of it,’ she replied.

Her colleague, Brain Hodgson, later noted, ‘It was a world without synthesisers, samplers and multi-track tape recorders; Delia, assisted by her engineer Dick Mills, had to create each sound from scratch. She used concrete sources and sine- and square-wave oscillators, tuning the results, filtering and treating, cutting so that the joins were seamless, combining sound on individual tape recorders, re-recording the results, and repeating the process, over and over again.’

Derbyshire continued to work at the Radiophonic Workshop for over a decade, lending her unique talents to shows including Inventions for Radio, Cyprian Queen and the Prix Italia winning Anger of Achilles. In later life she worked as a radio operator, in a Cumbrian art gallery and in a bookshop before returning to her first love - music.

Her pioneering work in the field of electronic music was often acknowledged by exponents such as The Chemical Brothers and Sonic Boom and she worked with stars ranging from Paul McCartney to Anthony Newley. Little wonder the Guardian acknowledged her, quite rightly, as ‘the unsung heroine of British electronic music’.

Find out more about Delia Derbyshire or hear her music including the Doctor Who theme performed live at Glastonbury. Mark Ayres, archivist at the BBC Radiophonic Workshop explains how the Doctor Who theme tune was created in this interview and Naomi Kashiwagi, organiser of Delia Derbyshire Day, discusses her career and genius here. You can explore much more about her legacy, how she worked and her music here. 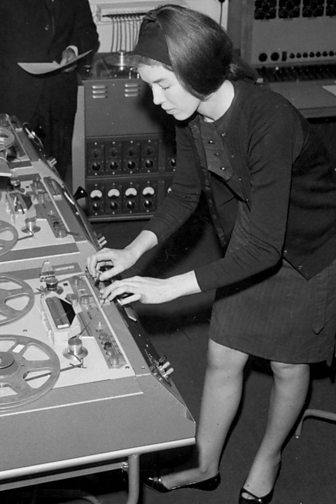