The One Show Chef Ricky Andalcio's A to Z Of UK Food.

Ricky Andalcio will be driving, cycling and walking across the UK, putting together the definitive ‘A – Z’ of gastronomic goodies. 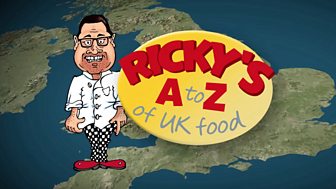 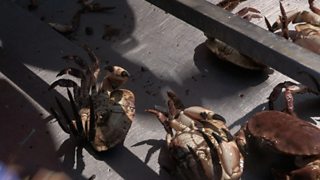 For the chilli dressing zest and juice of:

Add all to a jam jar and shake.

Combine with the crab meat and serve on Sourdough toast.

1.5 eggs (keep the remaining for the egg wash glaze)

Place the duck legs in a deep oven tray with a little water in the bottom. Season with pepper and a pinch of five spice (no salt), cover with foil and cook in the oven for 1 ½ to 2 hours at 180c until beautiful and tender.

Once cooked and cooled, remove the skin and strip all the meat off the bone.

Whilst the duck is cooking, put the soy, honey, ginger (cut into thin strips), pinch of five spice, Hoi sin and the zest and juice of the orange to a saucepan and reduce to a sticky glaze. Once reduced, add the orangey glaze and spring onions to the duck meat ready to stuff your clangers.

Make your plum filling by stoning and quartering the plums.

Put the butter in a pan followed by the plums and cinnamon. Cook on a medium heat until the plums start to soften but don't overcook (you still want some texture), then add the plum jam and mix together. Leave to cool.

For the pastry, mix together the flour, salt and butter with your fingertips until the mixture resembles fine breadcrumbs. Add the suet and 1 and ½ eggs, and then the water as necessary to achieve a “tightish” dough.

Take 120g piece of the pastry. Roll out into a rectangle sized approximately 25x15cm.

Cut a finger's width of pastry off one of the (shorter) rough ends. Approximately two thirds width in from the side of the pastry (from the shorter end) brush the pastry from top to bottom with a strip of water and then stick the finger of pastry to it. This will separate the savoury from the sweet filling.

Wet the rim of the pastry with water. Fold the pastry over the filling and stick the top edge to the bottom edge. Roll the pastry over so that the seal is now underneath. Crimp the edges (where you left the margin) to seal the filling inside. Make some kind of reference mark on the pastry so you can tell the savoury end from the sweet.

Cover a tray in baking parchment and put the clangers on top. Brush the pastry with egg wash and bake in the oven for 40 minutes until golden brown and then remove from the oven. Best served warm. 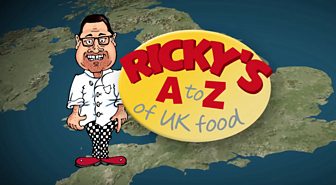