Rigsy was an artist who ended up on community service because of his graffiti. But the skill that got him into trouble would later save the world… 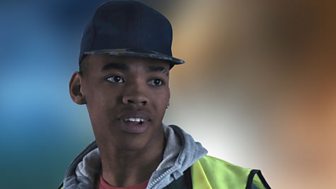 As a companion to ‘Doctor’ Oswald, Rigsy demonstrated many of the attributes that have helped make the real Doctor’s companions so indispensable.

He was brave – when he realised that he stood a chance of ramming the Boneless in the tunnel, he immediately took control of a train and drove straight for the aliens, even though he knew he might be killed in any ensuing collision.

He had Clara’s inquisitive nature, asking questions like a typical companion and having the intelligence to use the knowledge he’d gleaned. It was Rigsy, for instance, who first leapt onto the suspended chair in the room where PC Forest was killed, buying himself and Clara a little extra time during their escape from the house where the policewoman had been tuned into a mural. And although the Doctor first mused that the enigma concerning one of the Boneless’ earlier victims amounted to ‘a locked room mystery’, Rigsy made the connection independently only seconds later.

So although the Doctor initially dismissed Rigsy as a ‘barely sentient local… a pudding brain’, he soon had the Time Lord revising his original opinion. ‘I think you could be wrong about this lad,’ the Doctor told Clara, adding that Rigsy had ‘vital local knowledge’ and she shouldn’t scare him off!

Rigsy was a warm, kind-hearted soul. He reached out to Clara when he thought she was in mourning and after the Boneless was defeated, his first thought was to phone his mum to let her know he was okay. But just like Clara, Rigsy had a cynical streak. ‘The police weren’t doing anything,’ he claimed when discussing the authority’s response to the local killings, ‘They never do on this estate’. And when Fenton leapt to a worst case scenario when considering the alien invaders, his response was a terse, ‘Course you’d see it that way.’

Rigsy used his artistic skill to fool the Boneless into giving the TARDIS the power it needed to return to full size. This allowed to Doctor to emerge and send the aliens back to their own dimension. Even the Doctor conceded he’d been instrumental in keeping Earth safe. ‘Your last painting was so good it saved the world,’ he admitted to Rigsy. ‘I can’t wait to see what you do next!’

The Doctor didn’t have to wait long to find out. When Rigsy contacted the Doctor and Clara about a tattoo on his neck that he couldn’t remember getting, the Doctor dismissed it as ‘boring’… until he learnt that the tattoo was counting down!

The tattoo was a chronolock, a countdown to Rigsy’s death by Quantum Shade, a powerful creature that had taken the form of a Raven that Ashildr used to keep order. Anyone who broke the rules of the secret trap street would be forced to face the Raven.

Whilst the Doctor set about proving Rigsy’s innocence, Clara, moved by the thought that Rigsy’s new baby Lucy might grow up without a father, offered to take the chronolock from him as a means of insuring no one would die should their hunt for the killer fail. To Rigsy’s horror, although the ‘murder’ was proved to be an elaborate trap laid by Ashildr for the Doctor, there was no way to cheat the death promised to the raven and Clara had to die. With the Doctor teleported away, it was left to Rigsy to commemorate Clara’s death by painting a mural in her memory on the side of the forgotten TARDIS. 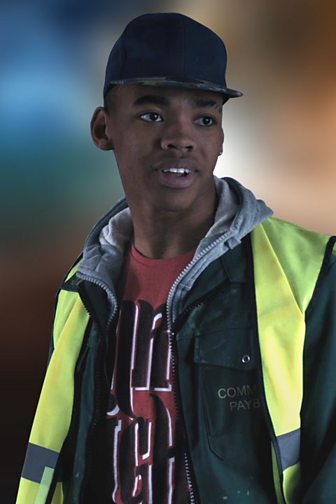