Once revered as the head of the Kaled Scientific Elite, Davros is now reviled throughout all the known galaxies as the creator of the Daleks! 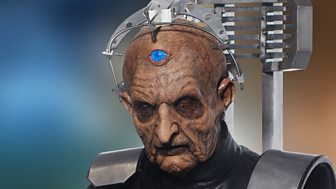 Davros was born during the Thousand Year War between the Kaleds and the Thals and although he did join the military, it was in a scientific capacity, aiming to create weapons that would destroy his people’s enemies forever.

Let this be my final victory. Let me hear you say it, just once. Compassion... is... wrong.

With the aid of the ruthless Nyder, Davros used his supreme scientific brain to create the ultimate force in the extermination of the Thals: the Daleks! The Fourth Doctor was sent back in time by the Time Lords who asked him to prevent the genesis of these evil creatures, and although at one point it looked as though he would be able to avert their creation, he balked at the notion of genocide and the opportunity was missed…

The Daleks, however, like all good children, lived up to their father’s expectations and exterminated Nyder and Davros! They were unaware that Davros’ life support kept him alive and they would one day meet again…

Davros eventually found himself imprisoned by humans in a cryogenic chamber. The Daleks liberated him in the hopes that he would find a cure for a virus that was wiping them out, but Davros instead looked for a way to bring his creations under control. His efforts were thwarted by the Fifth Doctor and he was forced to flee.

Davros and the Doctor, now great enemies, fought each other many times, before, during and after the Great Time War. Their most recent battle saw the two ancient foes confront each other again on Skaro, where they first met centuries earlier.

On this occasion, Davros tried to trick the Doctor into letting him exploit his Time Lord regeneration energy, eager to strengthen ‘his’ Daleks and vitalise his own, aging body. And although the Doctor did share his energy, he did so with an awareness that Skaro’s discarded ‘sewer’ Daleks would rise, revolt and attack the planet’s current inhabitants! And so with his plan in tatters and his creatures under attack, Davros had again been defeated and just when he thought his day couldn’t get any worse… Missy poked him in the eye!

But the Doctor had unfinished business… He realised that the concept of mercy had somehow been introduced to the Daleks and so returned to the Thousand Year War and faced the young Davros, again. He’d met the child earlier and had been reluctant to rescue him from the hand mines that blocked his path in a battlefield. Now, using Dalek weaponry, the Doctor blasted the mines and prepared to take him home. The child asked, ‘Are you the enemy?’ and the Doctor replied, ‘I’m not sure that any of that matters. Friends, Enemies. So long as there’s mercy… Always mercy.’ 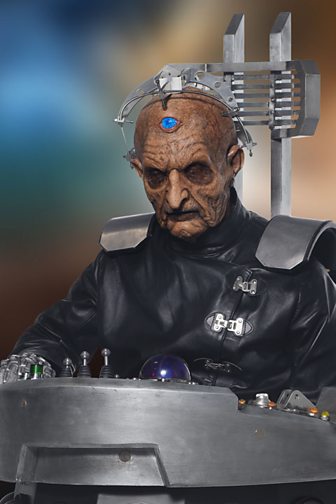