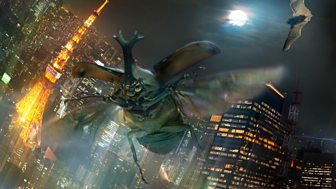 In this story, we encounter a male Japanese rhinoceros beetle adorned with an impressive and ornate horn protruding from his head. He is kept as a prize-winning pet and lives the life of a gladiator in the biggest metropolis in the world – Tokyo. 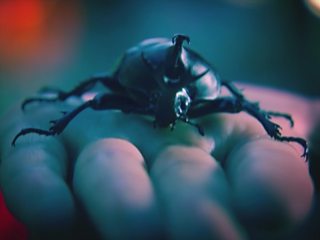 Each night, in the backstreets of the city he is pitted against other beetles in wrestling tournaments.
Hidden Kingdoms

Having spent most of his life buried in soil, this Japanese rhinoceros beetle has developed from an egg to a wriggling larva, until eventually after one year; he emerges from the earth as an adult. But life as an adult is short; in less than 4 months he must find and defend a territory and win over the fairer sex. To do this he must fight.

In the city, Japanese rhinoceros beetles, also known as ‘kabuto-mushi’ (as they resemble helmets worn by medieval samurai), are popular pets and can be bought in department stores and, in the past, even from vending machines. Each night, in the backstreets of the city they are pitted against other beetles in wrestling tournaments.

In stark contrast, in their natural forested habitat, males engage in combat to maintain territories and to protect areas of oozing sap on the trunks of oak and ash trees. These armour-plated warriors use their forked-weapon to lift other males off the ground, flipping and throwing them into the air to win the fight. Having laid claim to his territory, the victor bores into the tree trunk and feeds off the sap exuding from the wound to satisfy its ‘sweet tooth’.

Often the biggest males have the largest horns. Smaller male rhinoceros beetles are no match for their bigger counterparts, so instead they use ‘sneak’ tactics to mate with females when the larger male is preoccupied.

As a nocturnal species their eyes are adapted to optimize low light levels. With around 22,000 facets, rhinoceros beetles have very good vision compared to other night-time insects. However, an unfortunate consequence of this adaptation is the tendency to be attracted to bright lights and illuminated areas. Fortunately, for this species, he can use his sense of smell to detect fermenting sap.

Although he may appear a little ungainly, flying is his principal form of locomotion and he’s actually quite good at it, having the ability to take-off vertically.

After escaping life as a captive gladiator, the male beetle enters an alien world of concrete and steel. Although surrounded by manmade structures, can his ability to fly and excellent sense of smell lead him to an oasis of green-space in the city, and so find sanctuary? 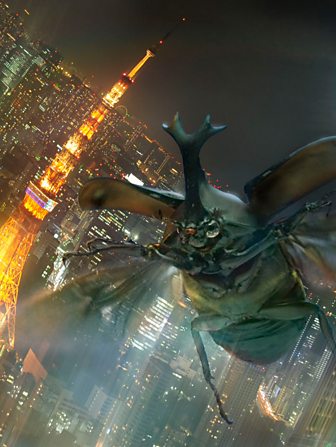