Jackie Kay was born in Edinburgh in 1961 to a Scottish mother and Nigerian father, and was adopted at birth by a white couple living in Glasgow. She had a happy childhood, in spite of racial bullying at school, and remains close to her adoptive parents. The birth of her own son spurred her to trace her natural mother. She has said that 'All writers draw on their own experience and a lot of my experience has been heightened'. Thus her poem sequence 'The Adoption Papers' considers the experience of adoption, while the consciousness of being black in Britain, and concerns with gender identity (she identified herself as lesbian early on), are also constants in her work. 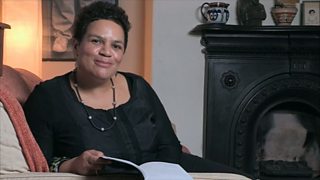 At first Kay wanted to be an actress and attended part-time classes at the Royal Scottish Academy of Music and Drama in Glasgow. She was encouraged towards writing when a teacher sent some of her poems to Alasdair Gray, who recognised their merit and told her that she really was a writer.

She studied English at the University of Stirling and then moved to London, originally with the intention of becoming a dramatist. She has written poetry, fiction and plays, as well as a non-fiction work about the jazz singer Bessie Smith. Though she has continued to live in England, latterly in Manchester with her partner, the poet Carol Ann Duffy, she has said that she regards much of her writing as Scottish, not necessarily in subject but in language and speech rhythms. Among other awards she has received the Saltire First Book Award, the Somerset Maugham Award and the Guardian Fiction Prize.﻿

﻿Jackie Kay's work, constantly exploring questions of personal, racial and sexual identity, is not merely autobiographical, but considers wider applications of multiculturalism and gender confusion. Her first poetry collection, The Adoption Papers (1991), opens with the poem sequence of the same name, originally presented as a radio piece for three voices, and printed in three typefaces to distinguish the voices of birth mother, adoptive mother and child. The child's attempts to work out her situation ('But I love ma mammy whether she's real or no') is complicated by the casual racism expressed even by a teacher ('I thought/ you people had it in your blood'). The other poems in the collection continue these themes and introduce others, such as the ravages of AIDS. We hear the voice of the child of a lesbian couple, in 'Mummy and Donor and Deirdre', and of a man whose homosexuality must be kept hidden: 'It's my daughters that worry me./ Course I can never tell the boys down the pit.'

Kay's novel Trumpet (1998) was inspired by a true story, but in her hands becomes a gripping exploration of the construction of identity. Famous jazz trumpeter Joss Moody was discovered on his death to be not a man but a woman. Like The Adoption Papers, the novel is told in several voices: Joss's wife (who, of course, knew the truth), his adopted son (who did not) and a tabloid reporter who pursues the story with prurient zeal. In third-person interpolations the doctor, registrar and undertaker are shown reacting to a situation unprecedented in their professional lives. Most effectively, we hear from Joss himself how music liberates him: 'When he gets down, and he doesn't always get down deep enough, he loses his sex, his race, his memory.' In addition, Joss is of mixed race - another source of confusion: is he Scottish or African? - and as a jazz musician he puts on an act at every performance: 'He looked real and unreal like a fantasy of himself. All jazz men are fantasies of themselves.' So what is Joss's true identity? Can that ever be certainly established, for Joss or anyone else?

Music is also one of the themes in Kay's second poetry collection Other Lovers (1993), which includes poems on her heroine Bessie Smith. Illness, already present in some poems in The Adoption Papers, comes to the fore in her third collection, Off Colour (1998), though the deliberate ambiguity of the title should also be noted.

Her first collection of short stories, Why Don't You Stop Talking (2002), extends into the area of mental illness. In the story 'The Woman with Fork and Knife Disorder', dissociation from life is chillingly expressed through disorder in the cutlery drawer: 'She went to put a knife away in the knife section. When she next looked down that same knife had somehow cut loose and joined the teaspoons, lying blatantly across them, almost smiling, a wide silver smile.'

Kay has also published several books of verse for children and a children's novel, Strawgirl (2002), which is highly valuable in giving expression to a child's feeling of being different - for whatever reason - which she herself has experienced and which still fuels much of her work.