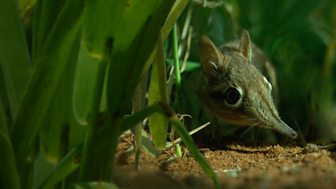 A tale of an orphaned elephant shrew

In this story, a lone young elephant shrew has to fend for herself in the middle of the African plains. Also known by its African name ‘sengi’ and related to aardvarks, hyraxes, sea cows and even elephants this tiny mammal must survive in a world beneath the feet of some of the largest animals on earth. 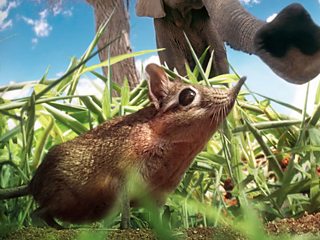 Sengis can spend as much as half their waking hours maintaining neat and tidy trails.
Hidden Kingdoms

Unlike most small mammals the sengi does not construct burrows for protection and shelter but instead rests for only 2-3 minutes at a time. The key to survival and the attribute that allows it to sidestep the titans of the African plains is incredible speed, constantly racing through the miniature jungles of the Savannah’s grasslands.

To avoid battling through dense grass the sengi constructs networks of tiny trails through the undergrowth. It does this by biting off stray twigs or leaves that block its path and ‘sweeping’ the trail free of loose debris using its legs and sometimes its forehead. The sengi spends as much as half its waking hours maintaining neat and tidy trails. Without these tracks the sengi could not survive. It uses them to rapidly navigate through its territory and to escape from predators.

Not only does it use its powerful hind legs for running but sengi are capable of jumping vertically over three times their body length. This helps them catch those insects that are a little harder to reach. Sengis love to eat insects, especially termites and ants. These make up almost 75-99% of their diet.

After only a single day a new-born sengi is able to walk and is extremely independent. The scent glands of a sengi are in the soles of its feet and parents allow their young to climb on their back and vigorously rub their feet onto the fur. This transfers a scent creating a ‘family’ odour. Adult sengi distribute this odour throughout their territory by sand-bathing and rolling which allows their young to learn the routes of their trails.

Instinctively the young sengi discovers its talent for good house-keeping and begins a clean-up operation. It is this combination of autonomy, orderliness and agility that allows the sengi to survive in the treacherous African grasslands.