Eldest of the Cratchit children. 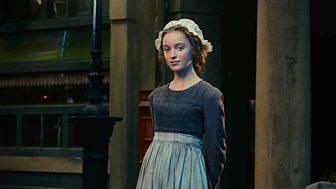 Martha thinks the greatest problems she has are chapped hands and a make-do-and-mend wedding dress. Little does she know something far bigger may come between her and a perfect wedding day.

Phoebe Dynevor’s first role was as series regular Siobhan Mailey on Waterloo Road. Since then she has also had roles in Prisoners' Wives, The Village and The Musketeers.

Christmas dinner with the Cratchits

The Cratchit family are the beating heart of Dickens’s A Christmas Carol.

Christmas dinner with the Cratchits is one of the most iconic scenes from Dickens’s fiction:

"Such a bustle ensued that you might have thought a goose the rarest of all birds; a feathered phenomenon, to which a black swan was a matter of course: and in truth it was something very like it in that house. Mrs. Cratchit made the gravy (ready beforehand in a little saucepan) hissing hot; Master Peter mashed the potatoes with incredible vigour; Miss Belinda sweetened up the apple-sauce; Martha dusted the hot plates; Bob took Tiny Tim beside him in a tiny corner at the table; the two young Cratchits set chairs for everybody, not forgetting themselves, and mounting guard upon their posts, crammed spoons into their mouths, lest they should shriek for goose before their turn came to be helped. At last the dishes were set on, and grace was said. It was succeeded by a breathless pause, as Mrs. Cratchit, looking slowly all along the carving-knife, prepared to plunge it in the breast; but when she did, and when the long expected gush of stuffing issued forth, one murmur of delight arose all round the board, and even Tiny Tim, excited by the two young Cratchits, beat on the table with the handle of his knife, and feebly cried Hurrah!

There never was such a goose. Bob said he didn't believe there ever was such a goose cooked. Its tenderness and flavour, size and cheapness, were the themes of universal admiration. Eked out by the apple-sauce and mashed potatoes, it was a sufficient dinner for the whole family; indeed, as Mrs. Cratchit said with a great delight (surveying one small atom of a bone upon the dish), they hadn't ate it all at last!" 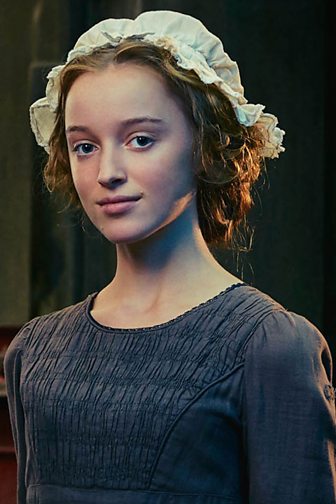 More on the characters