The Teller was creature of awesome power able to telepathically sense guilt and turn a victim’s brain to ‘soup’ without even touching them. These two abilities alone made him invaluable to the Bank of Karabraxos… 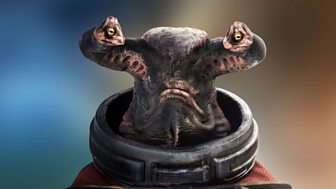 The Teller cut a terrifying figure in the corridors and courtyards of the Bank of Karabraxos. In the more public areas he was enchained and flanked by armed guards as he went about his grisly work, sniffing out anyone harbouring illegal intentions toward the bank. Once detected he would wipe his victim’s mind leaving them alive but unthinking, perfect for Ms Delphox to display as reminders of what would happen to anyone who tried to defeat her bank’s security.

It hunts guilt!
The Doctor

Ms Delphox claimed the Teller was the last of its species and that he signed an exclusive contract but the Doctor worked out there was much more to the creature and his situation. ‘Must be noisy - inside its head,’ he reasoned, adding, ‘Painful to listen to so much chatter, so many secrets – must drive it wild…’ So how did Ms Delphox force the Teller to obey her?

The answer lay locked up in a cell, imprisoned by Karabraxos: a female member of the Teller’s race who was the only other survivor of his species. The bank had been holding her hostage, a bargaining counter to ensure the Teller carried out their cruel instructions. The Doctor freed her and dropped them both off on a planet where they could live together, away from others. ‘So much mental traffic in the universe,’ the Time Lord reflected, ‘Solitude is the only peace.’ 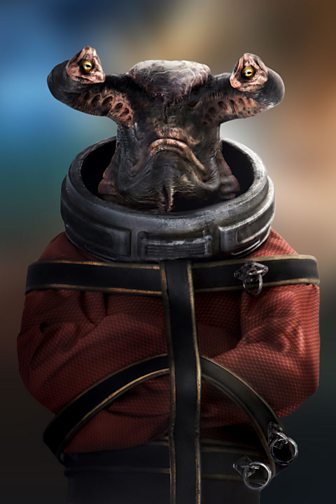