A smooth operator with an eye for a quick buck, Michael likes danger - and takes big risks to ensure he gets his own way... 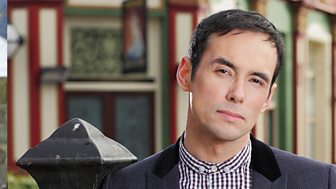 Michael has all the charming characteristics of his cousin Alfie, but with a more sinister edge. Though he's a chancer, Alfie has a good heart. Does Michael even have one?

Come on... you know you want to.
Michael Moon

Michael loves danger and takes big risks to get his own way. He's also very competitive and flashy, with a manipulative, jealous nature. He wouldn’t think twice about screwing people over – even those he loves.

﻿Love isn't something that comes easy for Michael. His relationship with son Tommy is lukewarm at best. However, in winning the heart of Janine, Michael showed his warmer side. Although he declared himself 'fond' of Janine, pushing her to rip up the prenup on her wedding day didn't give us much confidence in his motives, and Janine obviously saw this too when she delivered Michael an ultimatum; everything he desires (e.g. a massive suitcase of money) or her.

While Michael chose Janine, it was still not enough to banish the doubts she had about him out of her mind, and she departed The Sqaure, leaving Michael holding the baby. While there were doubts over Michael's ability to step up and be a dad to baby Scarlett, with the help of Kat and Alice (who has developed a big old crush on Michael), he seems to have formed a strong bond wih his daughter.

Becoming a responsible parent hasn't changed his ways too much though. He didn't miss an opportunity to bed Kat (again) after hearing that Alfie had asked her for a divorce. Tsk tsk.

When Janine finally returned to The Square she took taken Scarlett from Michael and banned him from seeing her! Michael managed to manipulate his No.1 fan Alice into sneaking in daddy/daughter meetings... but the stress of this cloak and dagger behaviour became too much for Alice who blurted out the truth to Janine. Realising that she had been well and truly had, a furious Janine fled The Square again, promising Michael that he will never be part of his daughter’s life. But after a sneaky piece of reverse psychology from Michael, Janine has decided that she can’t keep away...

While Michael was initially furious at Alice, his feelings seemed to make a quick turnaround as he ended up bedding the besotted girl, but that was just another part of his manipulations. Alice seems to have forgiven him however and his main issue now is Danny Pennant, whose romantic entanglements with Janine is getting Michael jealous and frustrated as he finds Janine has bought half of his business.

Still jealous, Michael continues to manipulate a starry-eyed Alice despite her dating Tamwar, and is using every opportunity to upset things between the pair, so that he can continue to use Alice against Janine. However, when Alice discovered that Michael had started to delete messages from her phone, she returned to Tamwar with open arms. Is this one step too far, or will Michael manage to manipulate Alice again, as his battles with Janine escalate?

With Janine taking out an injunction on him, the battle has reached an almighty peak. But Michael continues to plot his next move, using an infatuated Alice to his advantage. Will his seducing of Alice lead to sweet revenge on Janine? He plotted to get Alice to kill Janine, but when she got cold feet, his insults led to Alice kneeing him before fleeing their home. Luckily for Michael she reappeared the next day willing to help him with his plan. On Halloween, Alice went to Janine’s whilst Michael waited patiently in The Vic. After receiving a call, he returned home to find a distraught Alice with blood on her hands. Had Michael been successful in getting her to kill the Wicked Witch of Walford? Unfortunately not. Alice in fact had already told Janine the plans Michael had, and in turn, Janine had plotted to frame Michael. When it all came to light, the three faced each other at Janine’s. Michael attempted to get Alice back on side, but with the police on the way it was too late. Angered by her actions, Michael grabbed Janine by the throat, not letting go. He finally loosened his grip when a desperate and distraught Alice stabbed him. She ran off to let the police in, but Michael got back up and went for Janine - who proceeded to stab him a second time. Michael Moon finally lost the battle… 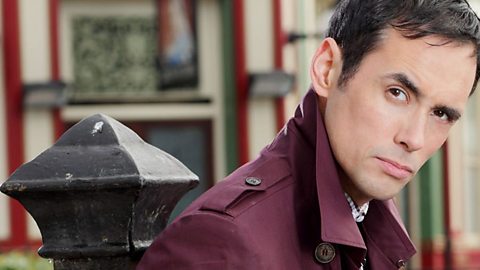 Lock up your daughters, Michael Moon is back in town! A cheeky chappy with an eye for a quick buck, he likes danger and takes big risks to ensure he gets his own way.... 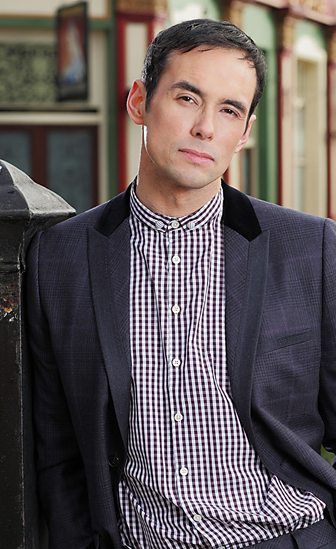