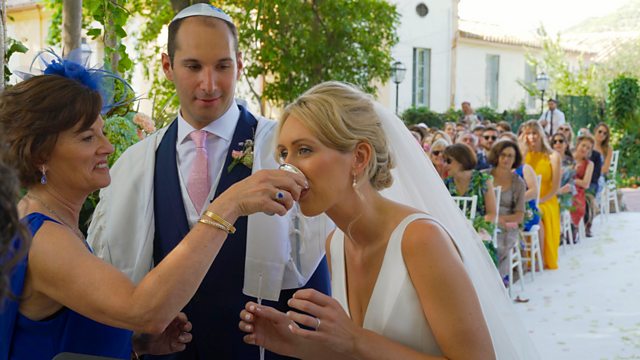 British Jews across the faith celebrate life’s big milestones, from birth and coming of age to marriage and the end of life.

This episode highlights how British Jews from across the faith celebrate life’s big milestones, from birth and coming of age to marriage and the end of life.

12-year-old Ethan is preparing for his bar mitzvah, a ceremony that marks his transition into Jewish adulthood. He has chosen to twin his big day with a young boy who died in the Holocaust, to honour his memory.

Jolanda converted to Reform Judaism after meeting Jack. Now they are tying the knot in Spain, in a modern ceremony they have adapted according to their beliefs.

At Bushey cemetery in Hertfordshire, Hilary describes her role as a volunteer who does the tahara, the ritual washing of the deceased before burial. And in London, David reflects on his late father’s life as he prepares to permanently mark his grave.

Rabbi Yanky and his wife Rochel are marking the birth of their third child, a baby boy, with a circumcision ceremony at eight days old, called a brit milah. It’s the first of many milestones in the baby’s Jewish journey.

See all episodes from Being...