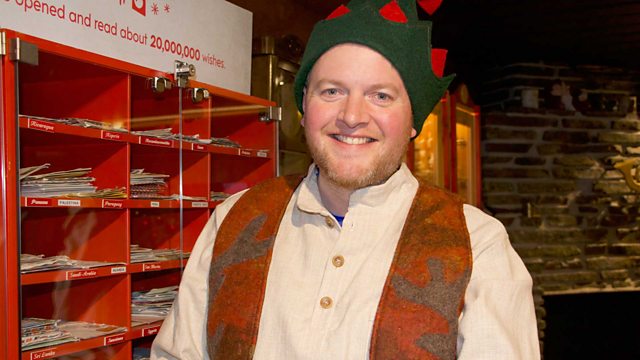 ...And Please Can I Have A Unicorn And World Peace?

Miles Jupp travels to the Arctic Circle. He has been given special permission to join the team of elves at Santa’s post office where around half a million letters arrive each year

Miles Jupp enters a winter wonderland as he travels to Santa’s post office in the Arctic Circle. He's been given special permission to join the elves who help Santa with around half a million letters that arrive each year from around the world. Donning a green and red elf hat, and braced by snow and sub-zero temperatures, Miles gets to work sorting letters under the watchful eye of Elf Riitta.

In this programme, we follow Miles on his magical trip and discover what lies in the hearts and hopes of children – and sometimes adults – who write to Santa.

Other global outposts of Santa's postal service include the UK’s Royal Mail and, in the USA, the town of Santa Claus, Indiana.

Joanna Espin from The Postal Museum in London reveals how historic letters to Santa can offer a social history of the times, sharing how a child in the late 19th century whose father had died from smallpox touched Santa with a heartfelt letter, receiving gifts and help. Chief Elf Pat Koch in Santa Claus, Indiana, shares a letter from the 1930s depression where a young girl asks for clothes and help for her family rather than toys and sweets.

In the UK, we join Yorkshire school children in Sheffield as they write their letters.

And back in Lapland, Miles takes a trip through snowy landscape on a reindeer sled as he prepares for a visit to the grotto of the Big Man himself.