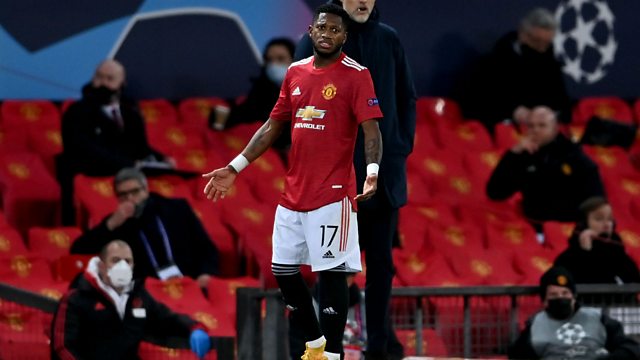 Mark Chapman brings you all the reaction to what was another dramatic night in the Champions League. Joining him for this episode is former Crystal Palace player, Clinton Morrison, ex Chelsea striker Chris Sutton and football correspondent, John Murray.

One of the main talking points from Manchester United’s loss was the fact that Fred, who got a yellow card after appearing to push his head towards Paredes, wasn’t substituted at half time and in the end got a second yellow card and had to leave the field – and the panel discuss what Ole Gunnar Solskjaer should have done, and they hear from the Manchester United manager on why he made the decisions he did.

French football expert Matt Spiro gives his view on Neymar and the PSG team and focus also shifts to Olivier Giroud, who scored all of Chelsea’s four goals against Sevilla in their Champions League clash. And we hear a sound that we have been missing - of real fans at a football ground as the EFL allowed some fans back for selective games on Wednesday night. Mark Chapman finds out what it is like having supporters back and an emotional Luton Town boss, Nathan Jones tells us how it feels having fans back at a game. And the guys marvel at the phenomenal form of Cristiano Ronaldo as he scores his 750th career goal.