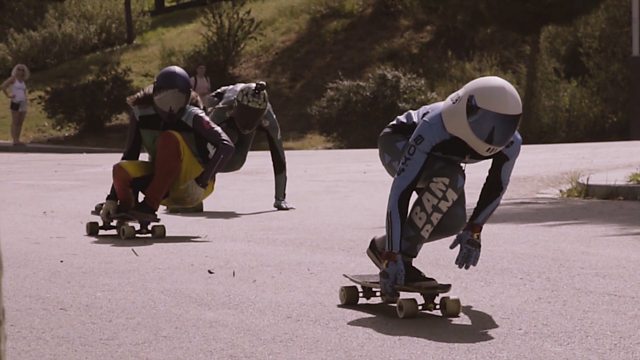 Jenny Schauerte is a champion downhill skateboarder, she lives off adrenaline. Her skateboard has given her some of the best moments of her life and also helped her through some of the worst. Jenny was at the top of her game when her father died suddenly in 2017, she then lost her job and her flat, and was living in her van - for weeks she couldn’t even get out of bed. But she has some brilliant skating friends, she calls them her ‘Woolf Women’, they helped her get back on her feet and on the road again. Last year they completed a 10,000 km journey across Europe skating down spectacular mountain roads, around hair pin bends, sometimes reaching speeds of up to 50 miles per hour. A film has been made about their adventure, it's called ‘Woolf Women’ and was made by 2Dare2 Productions.

If you have been affected by Jenny’s story you can find advice on the BBC Action line: bbc.co.uk/actionline