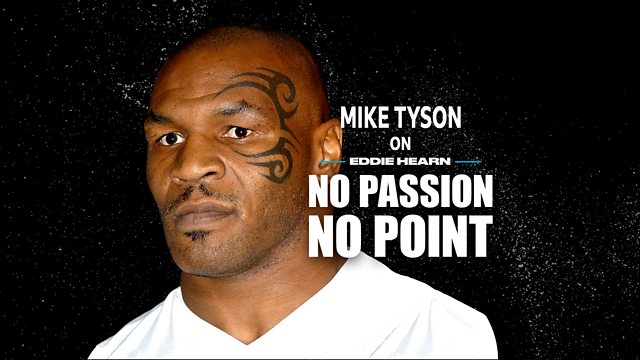 Eddie Hearn: No Passion, No Point

Eddie speaks to boxing legend Mike Tyson about his career, the current heavyweight scene and getting back into the ring aged 54 for an exhibition fight against Roy Jones Jr.

One of the World’s best-known sports promoters Eddie Hearn chats to some of the biggest names in sport, entertainment and business. This series includes in-depth interviews with Gary Lineker, Dina Asher Smith and Virgil Van Dijk. Eddie learns about their passions, what gets them up in the morning, and how they dealt with the world grinding to halt this year.

This week, Eddie is talking to one of the biggest names in sport, Mike Tyson. In the build-up to his fight with Roy Jones Jr, Mike Tyson takes time out of his busy schedule to talk to Eddie about the highs and lows of his career, shares his thoughts on the heavyweight divisions biggest names, and how it feels to be on the comeback trail aged 54.

Eddie also talks about the importance of boxing to the local community and the younger generation, and how Covid-19 has threatened the existence of the sport at grassroots level.

No Passion, No Point is produced by Gwyn Rhys Davies, and is a BBC Studios Production for BBC Radio 5 Live. Listen now on BBC Sounds.

See all episodes from Eddie Hearn: No Passion, No Point

See all clips from Mike Tyson (2)