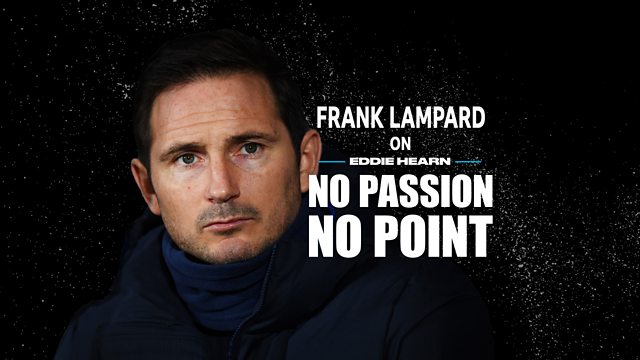 Eddie Hearn: No Passion, No Point

Eddie catches up with former schoolmate, Chelsea manager Frank Lampard about growing up with famous parents, the pressures of management and what the future holds for them both.

One of the World’s best-known sports promoters Eddie Hearn chats to some of the biggest names in sport, entertainment and business. This series includes in-depth interviews with Gary Lineker, Dina Asher Smith and Virgil Van Dijk. Eddie learns about their passions, what gets them up in the morning, and how they dealt with the world grinding to halt this year.

This week, Eddie is joined by Chelsea manager Frank Lampard. Both Eddie and Frank were at Brentwood School at the same time, so they reminisce over their memories of their school days, talk about the drive to succeed that took Frank to the top of the game, and his transition from playing into management in recent years.

No Passion, No Point is produced by Gwyn Rhys Davies, and is a BBC Studios Production for BBC Radio 5 Live. Listen now on BBC Sounds.

See all episodes from Eddie Hearn: No Passion, No Point

See all clips from Frank Lampard (2)