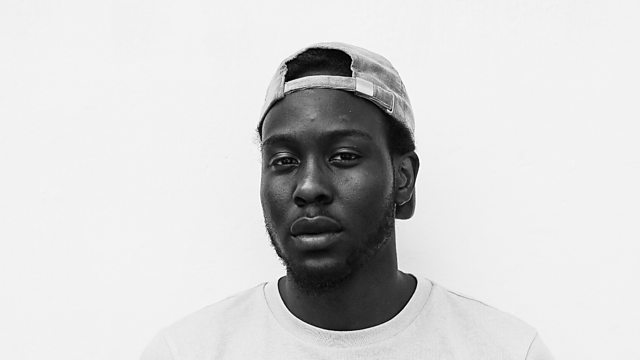 Through interviews and a new series of poems, poet Caleb Femi explores the pressures on teenage boys around virginity and sex.

Through a set of new poems, Caleb Femi, former Young People's Laureate for London, looks back on his first experiences with sex and explores the pressures on teenage boys around losing their virginity. He speaks to his friend, the writer Yomi Sode, about their experiences growing up; to Nathaniel Cole, a workshop facilitator, writer and public speaker on mental health, masculinity, and relationships; and to a group of 17 year old boys from a London school.

"I’ve always tried to avoid writing about love and sex and all the clichéd things you’d expect a poet to write about. But then lockdown happened and as many of us know, lockdown has a very reflective effect on you. I found myself going back to the beginning… to my teenage years, to all the things that shaped my ideas about sex, gender, love, intimacy, how I relate to women, and what I thought it was to be a man. And how difficult it was to talk about it openly - to express my concerns, my curiosities, my insecurities. I began writing a new set of poems about my first experiences with sex, and started talking to other men and boys about their experiences. I guess my hope is that, by talking more openly about these things that are sometimes hard or awkward to talk about, things will be a little bit different for young people, for teenagers coming up and trying to figure out who they are and how they fit into the world."

Caleb is a poet and director featured in the Dazed 100 list of the next generation shaping youth culture. Using film, photography and music Caleb pushes the boundaries of poetry both on the page, in performance and on digital mediums. He has written and directed short films commissioned by the BBC and Channel 4 and poems by the Tate Modern, The Royal Society for Literature, St Paul's Cathedral, the BBC, the Guardian and many more. Between 2016-2018, Caleb was the Young People's Laureate for London working with young people on a city, national and global level. Caleb performs and speaks internationally on major stages, and at institutions and festivals. He works on global advertising campaigns.

Produced by Mair Bosworth for BBC Audio in Bristol.