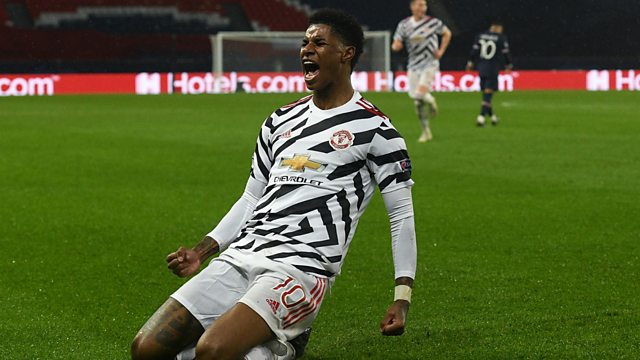 In the Paris rain, Marcus Rashford’s late strike for Manchester United saw off last year’s finalists PSG in their opening game of the 2020/21 Champions League. Away from home it finished 2:1 at the Parc des Princes. Meanwhile Chelsea didn’t have a thriller at home to Sevilla, it finished goalless at Stamford Bridge.

Ahead of Liverpool’s tie against Ajax on Wednesday, their first without Virgil Van Dijk, you’ll hear from Liverpool manager Jurgen Klopp on being without talisman Virgil van Dijk, how he feels let down by the lack of punishment handed out to Jordan Pickford, and Pat Nevin explains how Liverpool could be exploited as a result of his absence.

And could there be a new Champions League? A project, backed by FIFA and US bank JP Morgan, have outlined their thoughts for a European Premier League, although it receives something of a luke-warm reaction from Dion Dublin, Pat Nevin and John Murray.