'State of Palestine needs to be recognised now'

The British government needs to put pressure on Israeli Prime Minister Benjamin Netanyahu to go for a two-state solution in the Middle East creating a Palestinian state, Husam Zomlot, head of the Palestinian Mission to the UK has said.

He told Hardtalk's Stephen Sackur: "Netanyahu will not listen to just statements. He needs to know that there will be severe consequences and the state of Palestine needs to be recognised now." 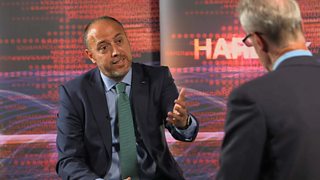 HARDtalk—Husam Zomlot – Head of Palestinian Mission to the UK