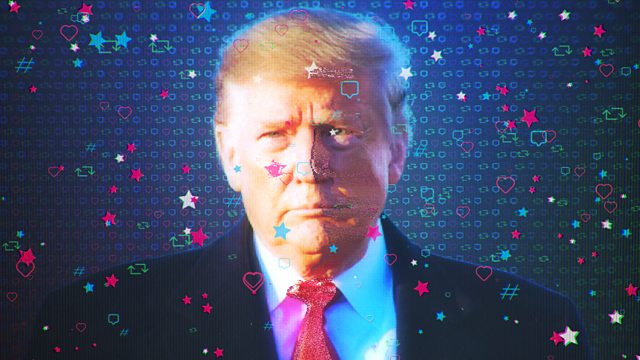 Examining how Trump used Twitter to change US politics, exploring why this technophobe became a serial tweeter and witnessing the impact his tweets have on the world.

Examining Donald Trump’s love affair with social media. Using his tweets and first-hand testimony from White House insiders, this documentary for BBC Three explores how the president of the United States came of age on Twitter and documents the impact of his tweets on politics in America and across the world.

With unprecedented access to people in his inner circle and interviews with experts, journalists and some of his most avid Twitter followers, this documentary tells the story of how Trump weaponised Twitter and used it as a tool to shape policy, conduct diplomacy and wage war on the establishment.

From Trump’s first innocuous tweet to his early celebrity beefs, from his feuds with politicians to the extraordinary exchanges with North Korea’s leader and his continuing war on anyone who opposes him, Trump uses Twitter to tell the world what he is thinking and doing at all times. The film explores how his tweets provide an insight into his psyche and help maintain his cult-like popularity amongst his followers. And in light of the recent events and protests across the US (and the rest of the world), the programme asks whether his tweets are a threat to democracy or the mark of a president who has revolutionised the way leaders communicate with their people.

Trump in Tweets features interviews with, to mention but a few, Anthony Scaramucci, former White House director of communications, who reveals what it is like when the president turns his Twitter feed on you, Sean Spicer, Trump’s first presidential press secretary, who got caught between the president’s tweeting and the press, and Rudy Giuliani, Trump’s personal lawyer.

The film also gains access to Peter Costanzo, who started Donald Trump’s Twitter account and wrote his first ever tweet, Sam Nunberg, former political consultant to Donald Trump, who was part of a team who helped Trump build a loyal following with a series of conservative tweets, including fuelling the conspiracy theory falsely claiming that Barack Obama had a fake birth certificate, Lauren Batchelder, who endured a sustained tirade of online abuse after she questioned Trump about his attitudes to women at a political event, and Emmy Bengtson, deputy social media director to the Hillary Clinton campaign, who wrote Hillary Clinton’s tweets during the ‘Delete Your Account’ Twitter battle between Clinton and Trump.

Yeonmi Park, a North Korean defector, gives her perspective of Trump’s ‘Rocket Man’ tweets, which dramatically raised tensions in the Korean peninsula, and Bryson Gray, a Trump supporter, explains what happened to him after Trump tweeted to endorse one of his raps.