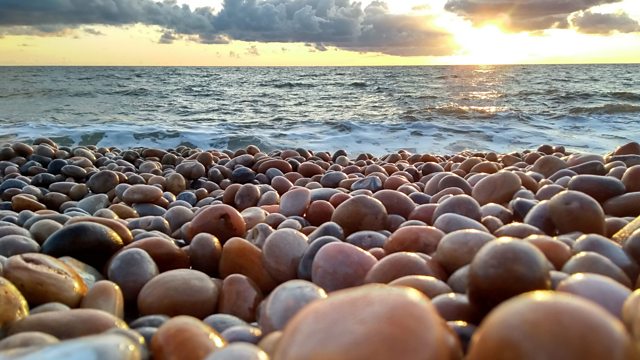 The Pebble In Your Pocket

Why do people love pebbles? What is it about their appearance, texture, sounds, history and folklore that inspires us? What do they tell us about the world, and about ourselves?

Why do people love pebbles? What is it about their appearance, texture, sounds, history and folklore that inspires us? BBC Radio 4 invites you on a lyrical pebble pilgrimage, shaped by the sounds of scrunching shingle and wild waves.

‘The beautifully shaped stone, washed up by the sea, is a symbol of continuity, a silent image of our desire for survival, peace and security.’ (Barbara Hepworth)

We hear how pebbles have influenced some of our greatest artists, possessing secrets of deep time, and woven into our history and our very being. What do pebbles tell us about the world, and about ourselves?

Across the British Isles, we meet a writer, a geologist, an archivist, a clothes designer, and a team of pebble dashers – people who work with and are captivated by pebbles. In Cambridge, we visit Kettle’s Yard gallery – created by the late art collector Jim Ede and known as the Louvre of the Pebble.

The programme includes pebble-inspired poetry and music, and soundscapes of pebbles recorded in a range of locations, from NE Scotland to SW England.