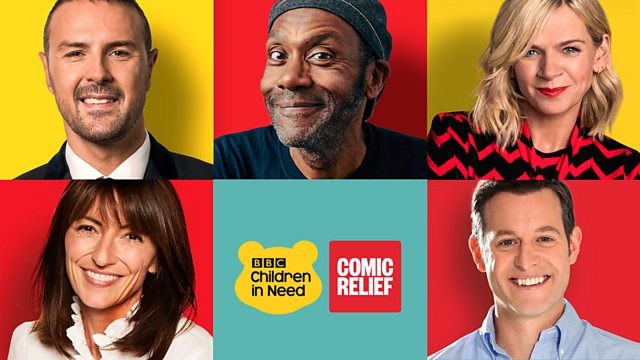 The Big Night In

Comic Relief and Children in Need join forces to deliver a very special night of television, hosted by Lenny Henry and Matt Baker. Including Clap for Our Carers at 8pm.

Comic Relief and Children in Need join forces for the first time to deliver a very special night of television during these unprecedented times.

The Big Night In brings the nation an evening of unforgettable entertainment in a way we've never seen before. More importantly, it will also raise money for and pay tribute to those on the front line fighting Covid-19 and all the unsung heroes going that extra mile to support their communities.

Together (but safely distanced), Comic Relief legend Lenny Henry and Children in Need's Matt Baker will join forces with Zoe Ball and Paddy McGuinness to host a night of comedy, music and live entertainment from the studio, linking up with a multitude of stars from their houses for an unmissable night.

Expect huge treats from comedy legends Peter Kay and Catherine Tate and music from the one and only Gary Barlow. If you have not yet had a dance around your house, then now is the time to do so with the stars of Strictly Come Dancing leading the way. And we'll be showing some of the greatest comedy sketches of all time, voted by you, the great British public.

And if that wasn’t enough, viewers will be have the chance to win some incredible money-can't-buy prizes across the course of the evening.

The show will give viewers the opportunity to donate, for those who feel able to do so, to help support vulnerable people of all ages and backgrounds across the UK who will be significantly impacted by the crisis.

See all clips from The Big Night In (29)