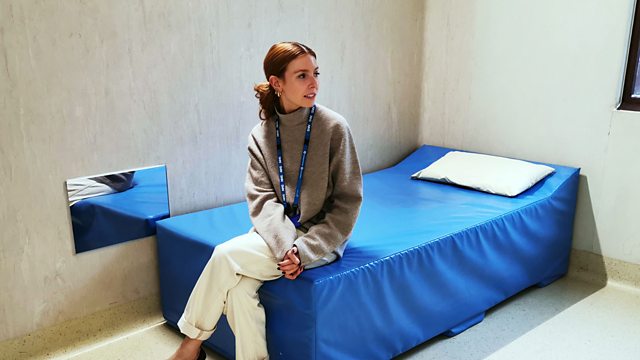 Stacey experiences the pressure of life on the frontline of mental health services, spending three weeks working alongside staff at Springfield Hospital in London.

Every year thousands of young people are brought to mental health units across the UK to seek treatment. Latest estimates put the number of people who suffer from a mental health condition at one in three, and most first experience problems when they are young.

Stacey is going to work in Springfield Hospital, one of the oldest mental health units in the UK, to see what life is really like on the front line of mental health services. More than just observing, she will be working directly with staff, dealing with patients, and taking part in making incredibly tough decisions about what is best for patients.

Stacey meets Rachelle, who has been diagnosed with EUPD (Emotionally Unstable Personality Disorder). Still in her twenties, she has had a troubled life already - full of suicide attempts and self-harm. She opens up to Stacey about her struggles with her illness, and her hope that she will soon get the talking therapy that she believes could be the solution to her problems. The doctors here agree that this is not the best place for Rachelle to be, and they are hoping she will get a place at a specialist unit in Cambridge where she can make real progress in coping with her condition.

Stacey also spends time in a special acute assessment unit, where patients can self-refer. She meets 19-year-old Kyle, who has come to Springfield in the midst of a severe depression and after an incident of self-harm. As Stacey takes part in a discussion with staff about whether to admit him to the hospital or support him in the community, she experiences for herself just how difficult the decisions and the judgement calls are that the team have to make.

Police have brought Laura to the 136 unit, so called because it is the local designated place of safety as defined under section 136 of the Mental Health Act. She has been sectioned after being found on a motorway bridge, threatening to jump. She opens up to Stacey as they talk, trying to explain her thinking and her ongoing struggles with depression and her eating disorder – all stemming from traumas earlier in her short life.

Face to Face with the Arms Dealers

Back on the Psych Ward

See all episodes from Stacey Dooley