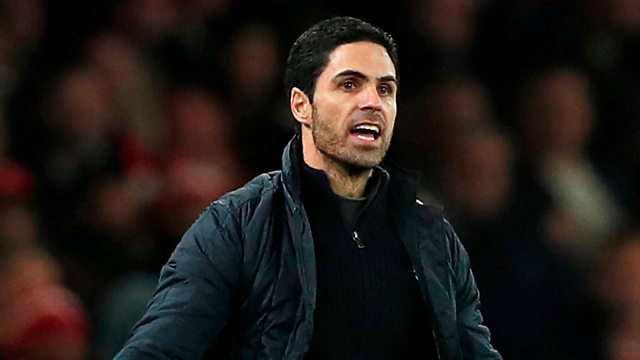 Kelly Cates is joined by Chris Sutton, Alistair Bruce-Ball and The Telegraph’s chief football correspondent Jason Burt as Arsenal make it through to the FA Cup fourth round with a 1-0 win over Leeds United.

The panel discuss Mikel Arteta’s coaching style as it’s revealed that he gave an “angry” team talk to his Arsenal players at half-time and they look ahead to whether Leeds United could cope in the Premier League if they earn promotion from the Championship this season.

The draw has taken place for the FA Cup fourth round – we hear from Shrewsbury Town’s Dave Edwards and potentially facing Liverpool at home – if they beat Bristol City in their third round replay – and Northampton Town captain Charlie Goode gives his thoughts on facing Derby County – who may play Wayne Rooney.

There’s also a preview ahead of the League Cup semi-final first leg between Manchester United and City.