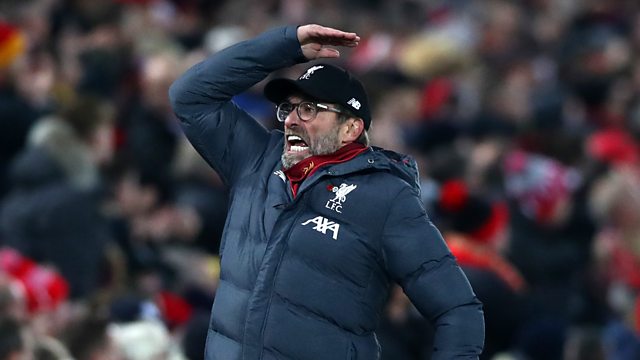 Liverpool humble Manchester City and have Leicester and Chelsea joined the title race?

The team discuss whether they think a penalty should have been awarded to Manchester City for a handball from Trent Alexander-Arnold, whether Pep Guardiola was tactically wrong and whether Man City can catch Liverpool who now have a nine point lead over their main title rivals.

As that defeat sees Manchester City slip to fourth in the Premier League table, the panel consider whether Leicester and Chelsea should be now included in the title race conversation.

There’s a heated discussion as the team debate about whether Gareth Southgate should try and persuade Jamie Vardy to come out of international retirement and play for England after he was pivotal once again for Leicester in their 2-0 win over Arsenal.

There’s plenty of praise for Willian’s performance for Chelsea in their 2-0 victory over Crystal Palace and Dwight McNeil’s recent form for Burnley as they ran out 3-0 winners over West Ham.

And where do England’s women’s team go next after their disappointing 2-1 defeat to Germany in front of a sell-out crowd at Wembley.