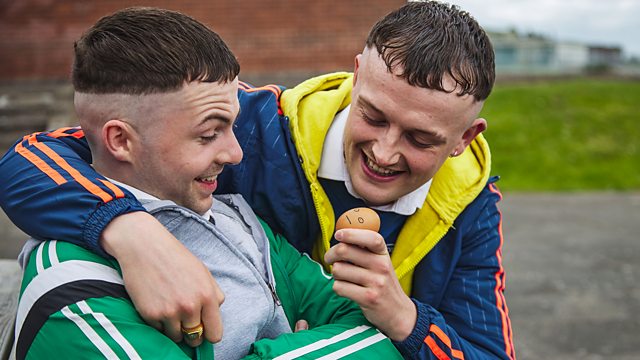 The Young Offenders Series 2
Episode 1 of 6

With a new arrival on the way, Jock is getting anxious and Principal Walsh isn’t helping. But a challenge to Jock brings about surprising results.

Irresponsible friends Conor and Jock are up to their old tricks again, this time trying to outsmart the police by doing the exact opposite of what they would expect – with hilariously disastrous consequences.

Meanwhile, pregnant Siobhán, her sister Linda and their parents Barry and Orla Walsh are all in a hospital waiting room. Today is the day of the first baby scan. Principal Walsh and Orla have had enough of Conor and Jock's irresponsible behaviour, so they come up with a plan – they’ll adopt Siobhán’s baby. The suggestion doesn’t go down well with anyone, so to bring the matter to a head and test Jock’s ability to look after a child, Principal Walsh challenges Jock to take care of an egg for a full month, without losing or breaking it. If he succeeds, Jock and Siobhán will raise the baby. If he fails, the Walshes will adopt the baby.

See all episodes from The Young Offenders