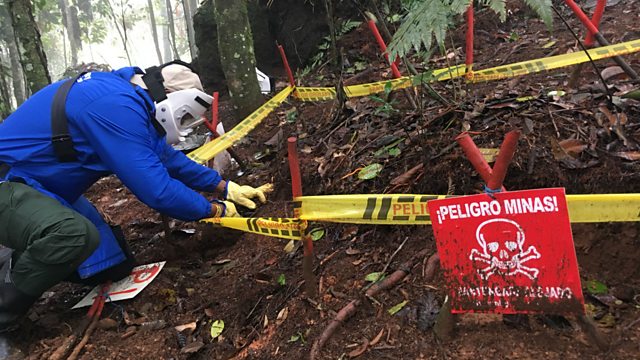 Healing the land in Colombia

In our special report from Colombia we take you to a remote part of the south west, where a local community is taking on the task of clearing their land of landmines left by civil war. According to the International Campaign to Ban Landmines (ICBL), Colombia has the second-highest number of landmine victims in the world, after Afghanistan. During the 52 year conflict between the government and the left wing FARC, both sides used explosive devices. Newsday’s Sophie Eastaugh has been to the distict of Caqueta, a FARC stronghold, to find out how demining help locals to reconcile with the past.

(Photo: A deminer from Human and Inclusion charity diffuses an IED in the forest. Credit Huongly Edwards/BBC)