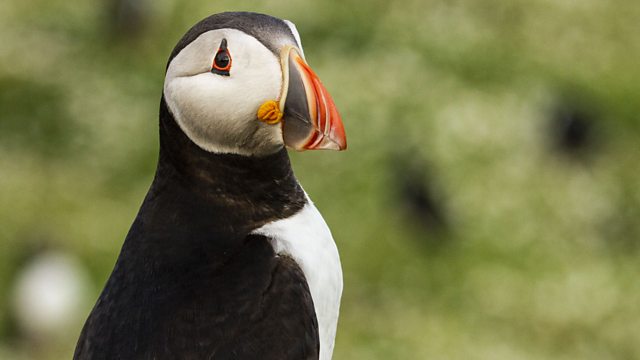 It is the first day of spring but winter has a sting in its tail as the country is blanketed with snow. As the sun returns, the breeding season finally gets underway.

It is the first day of spring in Wales but winter has a sting in its tail as the country is blanketed with snow. These are challenging times for wildlife such as the Carneddau pony, an ancient breed which lives on the tops of Snowdonia’s highest peaks. The mares are about to give birth, but they need spring to arrive, and fast.

As the sun returns and strengthens, Wales’s wildlife begins to stir. Adders head off on the hunt, dippers begin nest-building and black grouse – one of Wales’s rarest creatures – fight for the right to mate. The warmth brings new life too as Snowdonia’s wild ponies give birth. The herd’s stallion has his work cut out. The breeding season is underway and he must protect his mares from rival males.

In April, it is time for other species to begin mating. On the north coast near the Dee Estuary, is a very special habitat which is home to the endangered natterjack toad. The male toads must sing loud and long in order to attract a female.

In Cardiff, the great crested grebes – arguably one of the country’s most flamboyant and beautiful water birds – are courting. The birds rekindle their relationship with a dance, exchanging gifts of pondweed and renewing their bonds before the hard work of nest building and egg laying gets underway.

In early May in an ancient deer park in west Wales, two newborn badgers make their first foray above ground. Though badgers are social animals, older animals have been known to kill young cubs which step out of line, so their mother is protective and cautious.

In spring, the island of Skokholm, four miles off the coast of Pembrokeshire, welcomes some iconic visitors: ten thousand puffins. For the last eight months, they have been far out at sea, but now they have returned to the island to breed. They head to the exact same burrow they used the previous year. But not everyone has made it back. Puffins pair for life, but at the end of last summer they separated and spent the winter apart, foraging alone in the open ocean. It’s only now that some discover that their partner hasn’t made it through the long, stormy winter and the clifftops are full of lonely puffins.

After a freezing start, spring has warmed rapidly and in mid-May temperatures are soaring. The dunes of Ynys Las just north of Aberystwyth on the west coast are one of Wales’s most extreme environments - dry, hot and desert-like. This is the home of the sand lizard, a very rare reptile found in only a handful of places along the coast. One male risks all in his quest to find a partner. But there is another animal hunting in the dunes – a grass snake.