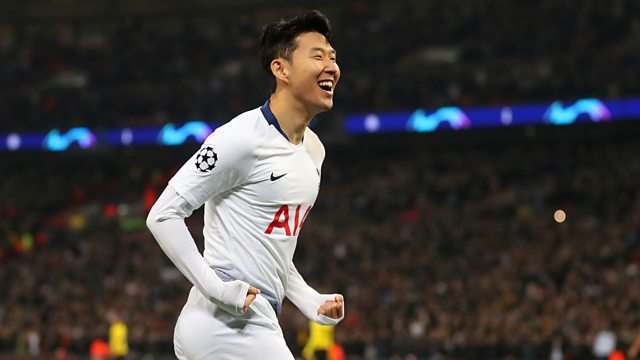 Son outshines Sancho as Spurs stun in the Champions League

The Football Daily podcast comes from Wembley with Kelly Cates, Lee Dixon and Ian Dennis dissecting Tottenham’s 3-0 win against Borussia Dortmund in the Champions League last 16 first leg tie. Ben Haines from 5 live sport’s The Squad joins the guys to give his take on the match and we get a view from Germany with football expert Taufig Khalil where the news of the loss has not gone down well with Dortmund fans. Spurs manager Mauricio Pochettino gives his view on the win and praises Son Heung-Min for his opening goal for his side.

Steve Crossman joins the pod to give the latest on the other Champions League game, where Real Madrid beat Ajax with a little help from VAR.
There was excitement in the Championship as Leeds now go back top with a win over Swansea, but there was a shock for Norwich who lost against Preston North End.

Also the team discuss West Ham’s Declan Rice and his decision to opt to play for England instead of the Republic of Ireland. Kelly gets the views of Andy Townsend who disagrees with the rules that allow Rice to switch international allegiance.